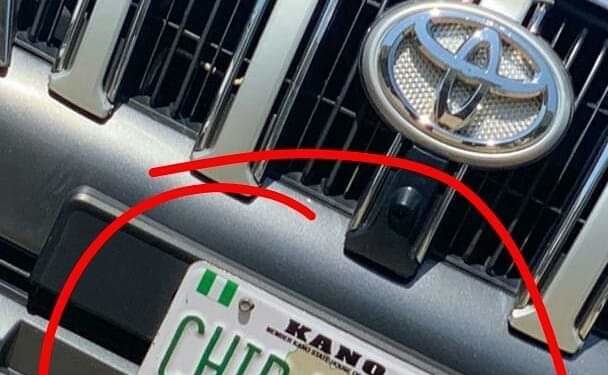 The Federal Road Safety Corps has dissociated itself from a misspelt customized number plate belonging to the Kano State House of Assembly, bearing “Chip Whip” instead of Chief Whip.

The misspelt number plate has caused stir on social media, with many commenters blaming FRSC for allowing it to pass the rigours of quality control before getting to the public.

The SUV is the official car of the Chief Whip of Kano House of Assembly, Mr Ayuba Durum.

But a statement by the spokesman for the corps, Bisi Kazeem, said the number plate in question was not produced by FRSC. The statement reads:

“The attention of FRSC has been drawn to the above number plate with wrong spelling of CHIP WHIP instead of CHIEF WHIP.

“We wish to inform the general public that this particular number plate was not produced by FRSC and could not have been from us as a lead agency of elites in traffic management, we are therefore clarifying clearly of our not having anything to do with the said plate as it is been insinuated in certain social media platforms.

“Furthermore, the Corps Marshal, Dr. Boboye Oyeyemi has directed the Sector Commander of Kano to investigate the origin of the purported fake number plate and thereafter bring the perpetrators to book while ordering all field commands to clampdown on fake number plates,” Mr Kazeem added

APC Senate caucus to meet with Buni’s CECPC on Thursday

When Will Our Tomorrow Come? By Douglas Ogbankwa, Esq.