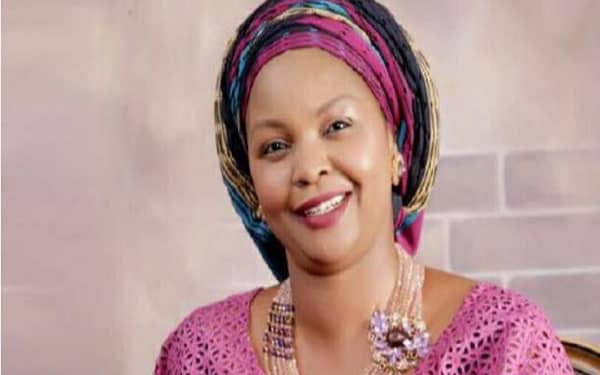 She alleged that her observations did not go down well with the suspended NPA Managing Director who caused her removal from the board without recourse to the Minister of Transportation, Rotimi Amaechi.

Read her narrative in her press statement published hereunder:

I was appointed into the board of the Nigerian Ports Authority (NPA) sometime in March 2020. In January 2021, Sen. John Akpanudoedehe and I were removed from the board and our removal was clearly orchestrated by the now suspended Managing Director (MD) of NPA, Hadiza Bala Usman.

Before my removal, I was not comfortable with the way the board and authority were run. I consistently expressed my discomfort and displeasure with the way the MD was running the place and this, I have no iota of doubt in my mind made her to orchestrate my removal from the board. Note, I was removed without the knowledge of the supervising ministry/Minister of Transportation, which was very uncommon.

My observations and complaints with the suspended NPA MD were more with the financial statements of NPA and I worried that if she continued so, there would certainly be trouble and her sudden removal (suspension) would be inevitable.

I noted discrepancies, I raised observations, I asked questions but I was completely ignored and disregarded. Answers were never provided, until my removal was plotted.

When the board came in, its first meeting was in June 2020, with the aim of deliberating on the financial report. I made some observations on the report which, obviously, the MD, Hadiza Bala Usman, was not comfortable with. At the time, the report covered 2 years but I objected,pointing out that, under normal circumstances, procedurally and international norms, it should cover a minimum of 3 years. It was after my objection that the MD grudgingly and resentfully provided the third year’s report. I wasn’t really comfortable. I observed more discrepancies with the financials and asked questions about them. The MD was uncomfortable and even felt slighted by the objective comments and questions.

Scrutinising the financial reports of the NPA is a very critical and very important aspect of my role and function as a member of its board, appointed by the President.I was not ready to abdicate that core responsibility. For me, my board membership of NPA, like every other public office I have held, was a call to serve my country and I was prepared to give it my all. But the suspended MD felt offended by my observations, questions, spotting obvious inconsistencies and acted like someone with a lot to hide. Answers were not forthcoming and, when they did, were less than satisfactory.

Some members of the board felt I was the only one holding the financial report back. I had to meet with the Minister of Transportation and I told him I wasn’t comfortable with the way and manner the board was being handled and treated by the MD and that I wanted to resign.

The board chairman, Chief Akin Ricketts (whose removal as board chairman was also orchestrated by the MD) and some other members, prevailed on.

After sometime,.my uneasiness did not go away. Again, I met with the Minister of Transportation and told him that I did not want to continue with the board with the way the MD was running the place. I met someone high up in the Presidential Villa and told him my own story and advised that the MD be called to order. I also met and made similar observations and complaints to the then Director-General of the National Directorate of Employment (NDE), Dr Nasiru and the then Permanent Secretary of the Ministry of Transportation, Mallam Zakari.

Instead of making amends, the suspended MD’s next move was to go against the NPA Act by designing my removal from the board.

The Act stipulates that it is the minister who should send names of appointees to the board to the President for approval. For someone to unilaterally go against the Act and the Minister that brought her on board was rather unfortunate.

I made it very clear to everyone I spoke with about the situation in NPA,stressing that it was not about me but the system, rules and procedures, as well as the survival of our institutions. I could not keep quiet and watch the suspended MD run the NPA aground. I wished she had listened but she didn’t and opted to plot my removal from the board. Unfortunately, I have been vindicated.

▪︎Masi is a former senator, who represented Adamawa North Senatorial District, between 2015 and 2019 and former board member, Nigerian Ports Authority (NPA).

DSO: N10b was never housed in any private account – NBC...

Matawalle: No more amnesty for bandits in Zamfara