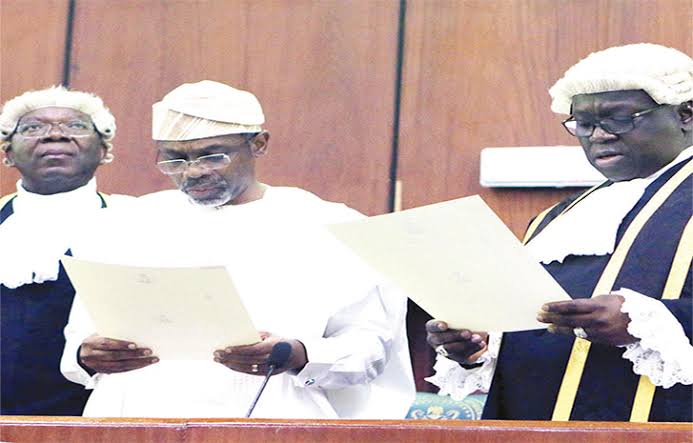 Members of the House of Representatives on Wednesday held a special session for the retiring Clerk to the House, Mr Patrick Giwa, during which members poured encomiums on him, describing him as a man of integrity.

Mr Giwa, who hails from Edo State, is bowing out of Service Thursday (November 26).

He has been replaced by Mr Chinedu Akubueze as the substantive Clerk to the House, as approved by the Management of National Assembly Service Commission (NASC) in October this year.

At the valedictory session on the floor of the House, which was presided over by the Speaker, Rep Femi Gbajabiamila, various lawmakers described the retired clerk as a reputable, highly efficient and resourceful bureaucrat and legislator.

The Speaker, Hon. Femi Gbajabiamila, in his remarks, described Giwa as a man of integrity and unblemished character, worthy of emulation in the journey of life.

According to him, ”as a Clerk, you’re in charge of finance, administration, security. You’re basically in charge of everything. I found Giwa to be a Clerk per excellence. I don’t think any member has anything bad to say about him.

“He has become a legislator by experience and training. He has become a custodian of our rules. I have never seen him absent from his seat, that’s a testament to his dedication to work. We wish you well in all your endeavours going forward.”

Also, the Minority Leader, Hon. Ndudi Elumelu said “Giwa is humble to a fault, full of integrity, upright and able to stand by what he says.”

He noted that the Clerk “is a detribalized Nigerian who conquered manipulation and never cared about materials things.”

According to him, ”I’m sure if you check his account, he will not have the money a retiring person suppose to have, because he chose to stand by his name. I’m proud to be associated with him, proud to call him a Niger Delta son. He came, saw and conquered and I wish him long life and all the best.”

On his part, Hon. Luke Onofiok recalled how helpful Giwa was to him as a new legislator, adding that God would continue to strengthen him in the journey of life.