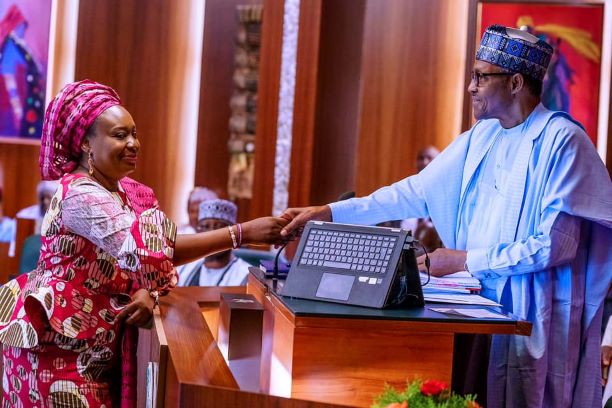 President Muhammadu Buhari Wednesday, presided over the swearing in of Mrs Folasade Yemi-Esan as the substantive Head of Civil Service of the Federation (HoS).
The ceremony took place at the Executive Council Chambers of the State House, Abuja about 11.07am.

Yemi-Esan was first appointed in acting capacity by the President in September 2019.
The new HoS, who was born on August 13, 1964, was appointed a Permanent Secretary in 2012 and at several times served in the ministries of information, education and petroleum resources.
She also served as the Secretary to the Committee on the Selection of Permanent Secretaries in the office of the HoS.
Her last appointment before she became Acting HoS was Permanent Secretary, Ministry of Petroleum Resources.
Yemi-Esan succeeds Mrs Winifred Oyo-Ita, whose retirement, Buhari approved last week.
The inauguration of the HoS preceded the weekly Federal Executive Council (FEC) meeting which was presided over by President Buhari.
The Vice-President, Prof Yemi Osinbajo; the Secretary to the Government of the Federation; Mr Boss Mustapha; Yemi-Esan; and the National Security Adviser, Major General Babagana Monguno ( retd. ) were also in attendance at the ceremony and FEC meeting.
Meanwhile, Yemi-Esan told State House Correspondents that she would focus more on the manpower development of the workforce in order to have an efficient civil service that would be result-oriented.
According to her the training and re-training of the civil servants would be her top priority.

Has Ayo Arise committed a political suicide? By Wale Ojo-Lanre

Trump not planning to publicly admit defeat even after Electoral College...

Chidinma Ojukwu opens up on how she tied Usifo Ataga’s hands...