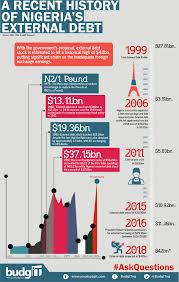 Servicing the nation’s external debt gulped $1.66bn in one year, from July 2018 to June 2019, an analysis of data obtained from the Debt Management Office has shown.

Our correspondent reports that within the one-year period, the country’s external debt rose from $21.59bn to $27.16bn.

This means that the external indebtedness of the country rose by $5.57bn within the one-year period. This shows an increase of 25.8 per cent.

A breakdown of the debt servicing expenditure shows that the country spent $194.44m in the third quarter of 2018.

Both the Federal Government and state governments have been ramping on up foreign debts in recent times in a bid to cut down on domestic debt servicing.

The rise in the domestic debt profile of the country has caused increasing concern within and outside government circles because of the high interest rate payable especially on domestic loans.

The International Monetary Fund, for instance, had recently said that the government was spending more than 50 per cent of its resources on debt servicing.

The African Development Bank also raised a similar concern in its 2019 Economic Outlook for West Africa.

However, the Federal Government insists that the country does not have a debt problem but a revenue challenge.

To tackle the challenge, it has put up a number of measures aimed at increasing the nation’s revenue profile.

Such measures include the bill to increase the Value Added Tax from five per cent to 7.5 per cent which was passed by the Senate on Thursday.

Interior Ministry to partner TWG on protection of civilians and civil...