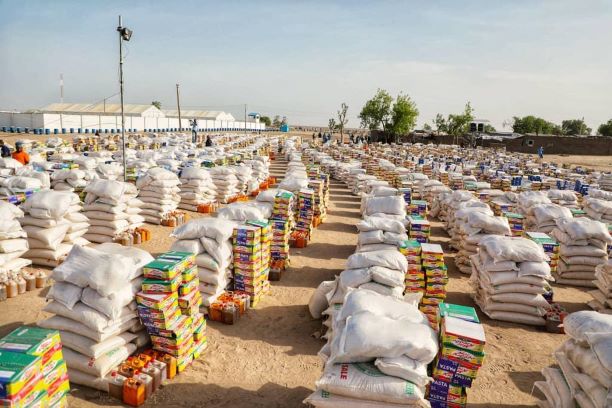 By Bode Olushegun
Borno Governor, Prof. Babagana Umara Zulum has led the distribution of food and non food items to 10,000 households living in Rann, headquarters of the Kala-Balge, Nigerian border town with Republic of Cameroon to assuage the hardship of COVID-19.
The latest visit, was the fourth by the governor to the local government which is the remotest in the state and was flown from Maiduguri to Rann, onboard a military chopper on Sunday.
The Governor, who had made three previous similar trips, the first being in June, 2019, few days after coming into office, when he undertook the need assessment of public facilities and subsequently ordered construction works.
He was later to return in December 2019 to distribute cash to 15,000 widows.
Zulum was soon back to Kala-Balge in February this year to distribute N100 million cash to 10,000 trapped families.
During the latest visit on Sunday, Zulum supervised the distribution of relief items to mostly women and aged men amongst other vulnerable persons in need, with about 300 Nigerians taking refuge in the Republic of Cameroon who returned to Rann benefiting from the gesture.
Each of the beneficiaries received a bag of 50kg Maize grain, two cartons of spaghetti, two bags of 10kg rice and a-3 liters cooking oil, while female beneficiaries got wrappers in addition to the food items.
Residents in Rann have since mid last year been trapped without road access to farmlands due to the flood from a dam, this forced Nigerians in Rann to resort to neighboring Cameroon Republic for livelihoods.
Governor Zulum at a press briefing after the exercise, acknowledged food contributions from the Federal Ministry of Humanitarian Affairs, the Northeast Development Commission (NEDC), National Emergency Management Agency (NEMA) and Dangote Foundation.
He said: “I wish to express my sincere appreciation to the President and Commander In Chief of the Armed Forces, Muhammadu Buhari, for all that he has been doing towards repositioning the northeast.
“I also wish to express my appreciation to the Ministry of Humanitarian Affairs, Northeast Development Commission, as well as NEMA and Dangote Foundation, all of them have contributed to the success of this excersice.”
Meanwhile, after his food distribution exercise, Governor Zulum traveled to Wulgo, a border community, to assess the destruction caused by the Boko Haram insurgents.
The assessment of Wulgo, according to Governor Zulum, was preparatory to resettlement of thousands of IDPs from the community currently staying at formal and informal camps in Gamboru town of Ngala LGA.
The governor said: “The aim of our visit here is to assess the town with a view to resetting back the community. We will have an interface with the community, I think the first thing we will do is to clear the town.”
Zulum then proceeded to Gamboru Ngala where he passed the night, during which he interfaced with the Internally displaced persons from different communities.
Also during his visit, Governor Zulum while in Rann and Wulgo, paid visits to military formations in the two towns in order to boost their morale.
During the visits, Zulum presented 250 bags of 50 kg rice,10 bags of 50kg sugar, 200 cartons of noodles, 500 cartons of sphagetti, cooking oil and cash to each of the formations.
Please follow and like us: