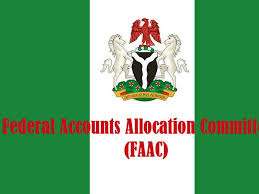 The Federation Accounts Allocation Committee (FAAC), at its meeting in Lagos, on Wednesday, shared to the Federal Government, States and Local Government Councils a sum of N647.353 billion as federal allocations for the month of January 2020.

The FAAC meeting was chaired by the Permanent Secretary, Federal Ministry of Finance, Budget and National Planning, Dr. Mahmoud Isa-Dutse.

However, cost of collection/FIRS, and NCS Refund/ Allocation to NEDC was N23.900 billion.

A communique issued by the Committee at the end of the meeting, indicated that the Gross Revenue available from the Value Added Tax (VAT) for January 2020 was N97.425 billion as against the N106.769 billion distributed in the preceding month of December 2019, resulting in a decrease of N9.344 billion.

The distribution is as follows; Federal Government got N14.614 billion, the States received N48.6174 billion while the 774 Local Government Councils got N34.009 billon.

The distributed Statutory Revenue of N508.686 billion according to the communique received for the month was lower than the N565.261 billion received in the previous month by N56.575 billion, which was also distributed as follows; Federal Government received N243.704 billion, States received N123.610, Local Government Councils got N95.298 billion while oil producing states derivation received N46.074 billon.

A statement by the Director of Information, Mr. Hassan Dodo said that the total revenue distributable for the current month (including cost of collection to NCS, DPR and FIRS) according to the committee was N647.353 billion.

Pfizer and BionTech to supply 50 million coronavirus doses of COVID-19...

Zulum gives 300 bicycles to ease transportation to school in villages