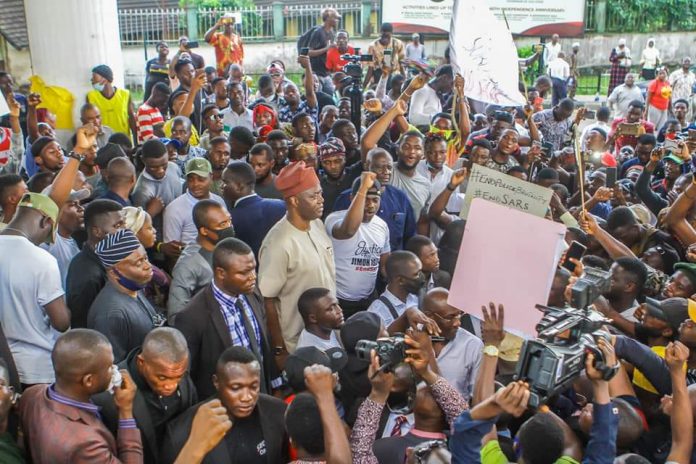 Several people have been killed and others injured after security operatives opened fire on #EndSARS protesters in the Lekki area of Lagos State, witnesses have said.

Security operatives had stormed the scene of the protest on Tuesday night hours after the Lagos Government announced a 24-hour curfew and opened fire.

Some protesters told Channels TV that they shot directly at them with an intent to kill them.

Many others turned to social media to share their experiences. In various tweets and Instagram posts shared, many containing video clips capturing sounds of gunshots and people with gunshot wounds and more, the protesters expressed outrage at what transpired at the venue.

In the process, witnesses said the security operatives fired live bullets at protesters there.

This, they said, resulted in the death of several persons with many others injured.

The witnesses said some government officials had come in the evening to unmount the CCTV cameras stationed at the toll gate.

They added that while the security operatives were carrying out the shooting, the light at the scene was put out.

In some of the videos shared on social media, people cluster together as they struggle to save some of those who sustained gunshot wounds during the incident.

Some persons were seen bleeding seriously, while others tried to extract bullets from their bodies.

The incident occurred hours after the Lagos State Governor, Babajide Sanwo-Olu, announced a 24-hour curfew in the state.

Governor Sanwo-Olu also has advised the security agents not to arrest anyone on account of the curfew.

He, however, urged the residents to observe the curfew for a peaceful atmosphere in the state.​

​The governor also asked them to remain calm and​ not allow criminals, who he said have hijacked the #EndSARS protest, to succeed in​ their evil plan​ of turning the state upside down.

​He promised to do all within his power to ensure that the lives of all residents were protected at all times. – CHANNELS TV

Here are the historic “firsts” in Biden’s administration

10 Young African farmers to get $1.1m from AfDB President

LEGALITY OR OTHERWISE OF THE DIRECTIVE TO PROSECUTE VIOLATORS OF TWITTER...

BREAKING: Office of the Accountant General of the Federation on fire...

Buhari commiserates with Algerian President over death of Bouteflika