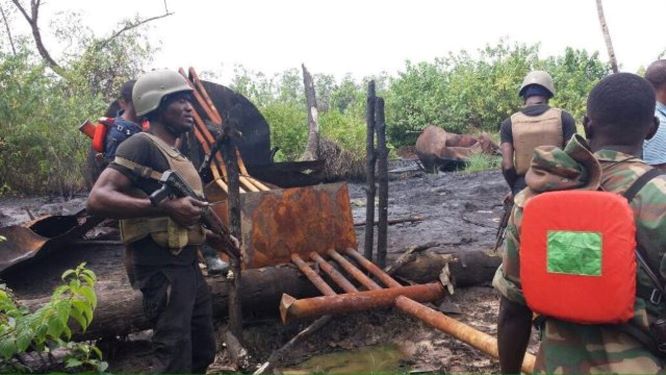 He said no arrest was made as the perpetrators fled on sighting the patrol team.

He said the site had 4 ovens, 4 coolers, 6 surface metal storage tanks and 2 dug out pits cumulatively laden with about 10,000 litres of products suspected to be illegally refined AGO and 440.2 barrels of stolen crude oil.

The Coordinator Defence Media Operations said the storage facilities were confiscated and the site has been earmarked for swamp buggy operation.

He said efforts are ongoing to convey the boat and content to the Base.

He said the Base patrol team located an illegal refining site around Isaka and Alakiri general area.

Enenche said the site had reservoirs laden with an about 1,257 barrels of crude oil. The site was dismantled. No arrest was made as the perpetrators fled on sighting the patrol team.

Enenche added that the successes recorded within the week include seizure of foreign parboiled rice as well as arrest of boats involved in smuggling activities amongst others.

Enenche said the rice was suspected to have been smuggled in from Republic of Cameroon, adding that the bags of rice and vehicle were evacuated to Mfum Border Post for onward movement to Government Warehouse, Calabar.

Enenche said the Chief of the Naval Staff congratulates the troops for their professionalism and efforts in curbing economic sabotage within the maritime environment.

He said the High Command of the Armed Forces of Nigeria congratulates the troops and urges them to remain steadfast and focused as they sustain the fight against economic sabotage.