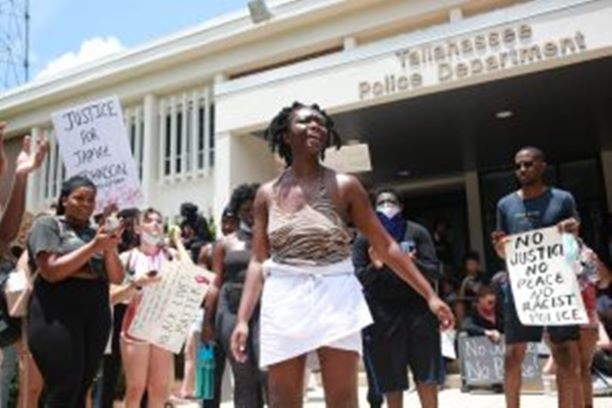 Oluwatoyin Salau, a 19-year-old protester who begged for justice in the wake of Black lives lost, has died. Police and her family confirmed the death Monday morning. Salau  who have Nigerian parents was found dead Saturday night after she went missing more than a week ago, on June 6.

Oluwatoyin Salau, 19, speaks in front of the Tallahassee Police Department during a protest held Saturday, May 30, 2020. Salau went missing on June 6 and was found dead Saturday, June 13,   Police arrested one suspect as Aaron Glee Jr, 49, who had been arrested twice recently for violent offenses.

However, investigators have not released a motive or any other details about what led to the homicide. “There is no justice that can be served that will replace my sister’s life,” her brother, Oluwaseyi Salau said.

Though she went missing June 6, newly surfaced surveillance footage shows on Wednesday, June 10, Salau walked into Big Easy Snowballs in Tallahassee, according to owner of the ice cream shop. She asked to use the restroom.

Suspect – Aaron Glee That was the last known day she was seen alive. In the hours before Salau went missing, she tweeted she had just been sexually assaulted. The afternoon she went missing, Salau tweeted a man molested her that morning around Park Avenue and Richview Road. She said the man offered to give her a ride back to a church where she had sought “refuge” because of “unjust living conditions.”

Toyin Salau “He came disguised as a man of God and ended up picking me up from nearby Saxon Street,” she tweeted. “I trusted the holy spirit to keep me safe.” Salau said she called police after the assault happened. She did not specify the church where she had been staying. Several people replied to her on Twitter offering help and asking whether she was OK. She never responded.