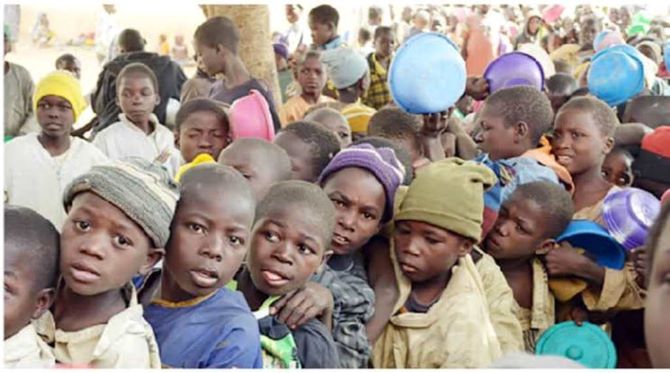 The Peoples Democratic Party (PDP) says President Muhammadu Buhari and the All Progressives Congress (APC) have completely betrayed the Almajiris and other downtrodden, poor and vulnerable Nigerians after using them to grab power in 2015.

The party in a statement by the National Publicity Secretary Kola Ologbondiyan said the APC and its government have continued to show their true colours especially as manifested in the neglect and dehumanizing treatment they have meted out on poor and vulnerable Nigerians since the outbreak of COVID-19 pandemic.

The PDP noted that APC’s disdain and desertion of our citizens had further exposed it as a deceitful party which used lies, propaganda and false promises to mislead the people in 2015 to denounce a system of governance which had their interest at heart and worked day and night to ensure a better life for them.

“Today, the APC and its government have succeeded in wrecking the lives of ordinary Nigerians; stole their common patrimony; rendered many homeless, turned their joy into sadness, hope into hopelessness, fortune into abject poverty; reneged on all their enticing promises, swindled and abandoned our citizens to a life of misery.

“From Katsina to Lagos, Kano to Edo, Kaduna to Osun, Yobe to Ekiti; Plateau to Kogi and all the places where the APC has left footprints at the federal and state levels, the downtrodden people have been exploited and now abandoned; treated by the APC as sub-humans in their own country.

“Today, the APC relishes in abusing and insulting Nigerian youths; from Kano to Lagos, they deny them access to economic opportunities and jobs, yet tag them as lazy. The APC deny our youths good education, health care, comfortable homes and access to basic necessities of life, yet demean them as outcasts and undesirable elements fit only for life on the streets and as tools to manipulate elections for corrupt APC leaders” PDP said.

The main opposition party in the country further stated that APC lied to a people who were already organizing their lives along the path of economic prosperity, development and national cohesion; they beguiled and misled them into believing that they were being led to Eldorado only to abandon them in the middle of the nowhere, stripped of honour and means of survival.

“The APC posed as the messiah; promised free houses, millions of jobs, monthly allowances and even to bring the value of dollar to one naira. President Buhari promised more prosperity and to rout out insurgency with the snap of the finger.

“Unfortunately, what we witness today are total reneging on these promises, degradation of citizens, hunger and starvation, intimidation of dissenting voices, untold corruption, neglect of our infrastructure, annexation of electoral and judicial system, violation of human rights, in addition to escalation of insurgency and bloodletting while the President, who promised to lead from the front, recedes very far into the luxury and safety of Aso Presidential villa.

“Nigerians can recall how the PDP championed the cause of the downtrodden, established Almajiri schools, the e-wallet initiatives for rural farmers, built new universities, revamped our economy, overhauled our health care system, established the National Health Insurance Scheme (NHIS), revamped the mortgage system to give Nigerians access to own homes and expanded the political space to promote youth and women participation in governance among others,” PDP said.

The opposition party also added that the ruling party has reversed all these gains, adding that President Buhari and the APC cannot point to any people-oriented project they have executed to better the lot of the poor.

They said this pandemic has further exposed the APC as a party without plans for Nigerians, which only came to grab power to enrich themselves at the expense of the ordinary Nigerians.

The opposition party urges Nigerians not to despair but to rally among themselves, help each other and ensure that a party like APC, which has become an emblem of misfortune, does not come to power at any level after the end of this tenure.

It said the party will continue to stand with Nigerians, especially the downtrodden and remain committed to protecting their interests at all times