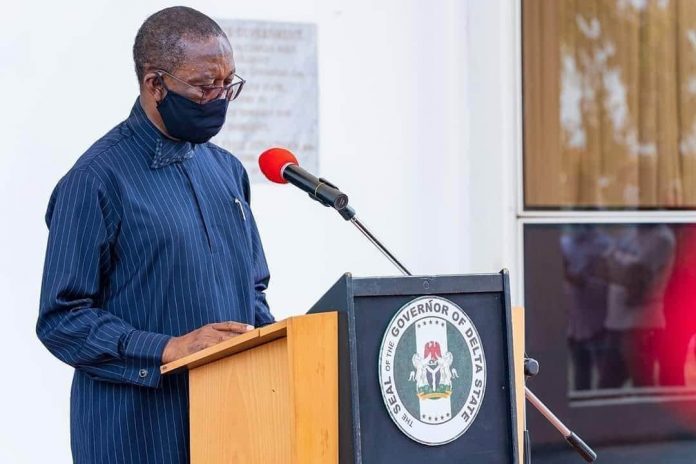 As part of measures to overcome the debilitating effect of COVID-19 on the national economy, the Delta State government has adopted interim fiscal measures to sustain public spendings.

To this end, there would be a review of salary of political appointees and workers on salary grade levels seven and above for six months with effect from July 2020.

Secretary to the State Government, Mr Chiedu Ebie, disclosed this on Friday, July 24, while briefing the press at the conference room in the state Head of Service office, Asaba.

Mr Ebie said the decision to review workers salary was reached at a consultative meeting with the organized Labour in the state.

While saying that the review was painful, difficult and inevitable, the SSG said it was a sacrifice that was needed to keep the state moving.

He said the downward review of the 2020 budget by N113 billion naira (one hundred and thirteen billion naira) was as a result of the dwindling revenues caused by COVID-19.

According to him, the review was not a repudiation of the new minimum wage in the state but a temporary measure that would be lifted as soon as the economy improved, stressing that it was without any prejudice to other staff members’ entitlements like promotion.

“You will recall that for the same reason of dwindling revenues caused by the debilitating ripples of the pandemic, the state government recently reviewed its 2020 budget downwards by over N113 billion, representing more than a 28 per cent shrinkage of the original fiscal projections for the year.

“As we continue to grapple with the difficulties associated with servicing other existing and equally important obligations to citizens, we remain profoundly committed to infrastructural development across the state as can be seen from some of the projects that are still ongoing despite the pandemic and its suffocating impact on the economy.

“As a responsible government, the Okowa led administration is firmly committed to the welfare and interest of its workforce and citizens of the state.

“It has amply demonstrated this commitment by being one of the few states in the federation to have faithfully and fully implemented the new minimum wage which became operational in November, 2019.

“Therefore, the proposed wage review is a painful and difficult decision but inevitable in our current circumstances,” Ebie added.

Meanwhile, he advocated for strict adherence to protocols that would keep COVID-19 in check in the state.

In their separate remarks, the Commissioner for Finance, Sir Fidelis Tilije and his counterpart in Information, Mr. Charles Aniagwu, said the monthly savings of the state government could  not offset  it’s wage bill of N7.7 billion monthly, emphasizing that the state had a workforce of 48,000.

The duo of Tilije and Aniagwu noted that the drop in oil production from 2.3 million barrels per day to 1.4 million and general decline in revenue had negatively affected the state economically, even as they sued for the cooperation of all in handling the situation.

The State Chairman, Trade Union Congress (TUC), Comrade Martin Bolum who spoke on behalf of Labour, said the decision was one of the ways to keep the state afloat in this period of Coronavirus pandemic.

He said Delta was one of the first states to implement the new minimum wage, stressing that the present salary review was for a while.

The Head of Service, Mr. Reginald Bayoko appealed to workers to see the development as a sacrifice by accepting the decision in good faith, affirming that any money deducted would not be refunded.

Sirika says flight resumption may not lead to hike in airfares...