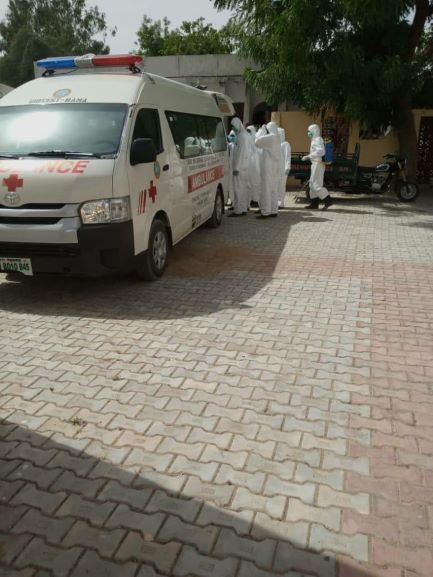 By Bode Olushegun
Borno State has lost six persons to COVID-19 in the last two days. The Commissioner of Health, Dr. Salisu Kwaya-Bura said six persons were lost between Tuesday and Wednesday shooting the mortality to nine.
He said the total number of positive cases as at Wednesday stood at 53 with over 160 persons screened from patients and contacts to those who have tested positive.

He lamented that the infection was not only limited to Maiduguri and Jere metropolis but had spread to Biu, Dikwa and Pulka, while warning the residents of the state to adhere to the rules of social distancing and hygiene.

He disclosed that plan had been concluded to increase the capacity of the isolation centre even as the contact tracing teams had been increased from 15 to 20.
Kwaya-Bura declared eight out of the nine people lost to the pandemic were from premorbid conditions as was the common feature of the disease globally.
The Commissioner of Information, Babakura Abba-Jato also at the daily briefing on COVID-19 on Wednesday disclosed that three Imams that conducted prayers last Friday had been suspended by the appropriate quarters.
He said they were suspended by the Chief Imam of the state and asked not to parade themselves as Imams anymore.
He said: “These are traditional things, we forwarded their names to those that appointed them and gave them the instrument to practice as Imams.
“They were immediately summoned by the chief Imam of Borno and subsequently suspended and they were asked not to parade themselves as Imams anymore.”
Please follow and like us:

For the Records Osinbajo: For kidnapping, banditry and all, justice...

Nigerian Consulate in New York shut from February 18 to 28,...