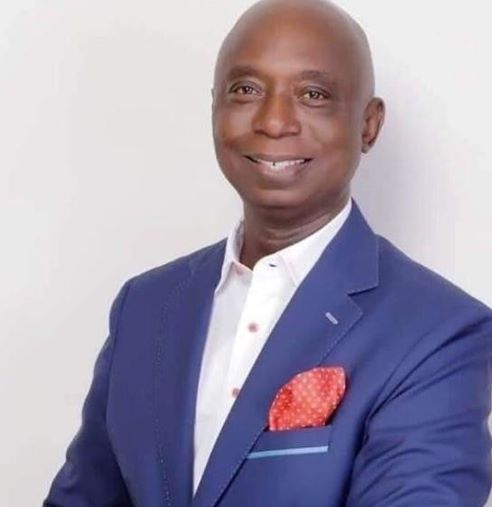 Throughout my years of active journalism up to the present stage, I always refrained from putting my foot forward to join issues with rotten apples in society. I detest entering the fray with those who thrive in the gutter from where they sling mud at innocent persons. Therefore, to step forth and expose the heap of putrid nonsense which has been oozing ad nauseam from one Azuka Jebose, was indeed an unwilled task for me. But I chose to do it of my own accord in this instance, against the grain of my usual precept, for the integrity of our good people of Anioma and our reputable leaders.

As I said, I do not fancy dissipating time and energy on petulant flies roaming about but nonetheless, every habit or rule has an exception. For me therefore, I felt it is high time Azuka Jebose stopped distracting us by disgorging those stinking phlegm on the sparkling image of one of Delta North’s best gifts to humanity, Prince Ned Nwoko. The uncouth and serial manner in which this Jack the Lad has been dishing out his series of malicious coated lies smacks of sinister infantilism. He has callously thrown truth, objectivity and general ethics of the journalism profession to the whirlwinds as he frolics in a mindless character-assassination mission of an innocent man. My advice to our people is to take Azuka Jebose’s gibberish essays as nothing but worthless tissues of lie that should be consigned to the rubbish dump site where they rightly belong.

I was told that Azuka Jebose hails from Onicha-Ugbo, a contiguous community of Idumuje-Ugbo and I shuddered as I queried: Where was Azuka Jebose when Prince Ned Nwoko spent over N100 million to fix the major link road of Onicha-Ugbo less than two years ago? Was the hatchet writer under the influence of an overdose of clinical anaesthesia or what? Of course, then neither a whisper nor whimper of appreciation came from Azuka Jebose. That alone indicates that the slanderer prefers to be a renegade and enemy of progress as demonstrated by his recent whimsical essays of hate and malice.

One does not need the service of a clairvoyant to deduce that virtually all the allegations against Prince Ned are puerile by-products of local envy, short-sightedness and primordial sentiments. Empirical evidence shows that a majority of the people of Idumuje-Ugboko, Onicha-Ugbo and other nearby communities are basking in euphoria about the developmental projects that God is using Prince Ned Nwoko to bring to the land including the proposed Stars University, the first of its kind in Africa.

The pattern of Azuka Jebose’s diatribe is predictable and boring. He is very economical with the truth as he strives to demonize and dress Prince Ned Nwoko in the borrowed robe of a bullish land grabber and murderer. All is bunkum and baseless. The hatchet writer has no atom of proof to back his outrageous claims. Jebose’s myopia is a chronic case of conscienceless abuse of the social media by a comic character masquerading as a journalist.

In contradistinction to the fallacious claims of the serial blackmailer, Prince Ned Nwoko has never indulged in land grabbing or racketeering anywhere in the world not to talk of his beloved ancestral Idumuje-Ugboko and its environs. The land where he is building the first sports university in Africa was duly and legitimately acquired from appropriate families in Idumuje-Ugboko and Onicha-Ugbo. It is noteworthy that he spent over 200 million naira on compensation over the acquisition of the land where the sports university and the international golf course are located.

Ironically, the 90 hectares of land granted him with a certificate of occupancy [C of O] is the very same land that different families were laying claim to and having confirmed from the Obi of Onicha-Ugbo as well as heads of Umuolo and Agba quarters, the Ned Nwoko Foundation has accordingly paid the families. The reason for the compensation and settlement was to put an end to farming on the international golf course inside Stars University land.

The farmers were compensated principally for peace to reign because most of them were not the owners of the land but roving farmers on the land. They were compensated based on the respected counsel of the then Obi of Idumuje Kingdom, the late Obi Albert O. Nwoko.

This writer can confirm that all documents concerning the ownership of the land where the Stars University is situated were properly and legally obtained. It is on record that not a single person was forcibly dispossessed of his or her land as falsely claimed. Azuka Jebose’s fictitious tale of a 92-year old woman purportedly ejected from her land is a treacherous lie designed to hoodwink the gullible.

One other report that was fabricated to tarnish the name of Prince Ned was the story of one Ugochukwu Nkenchor from Onicha-Ugbo and another Onicha-Ugbo youth who were involved in a bloody fight over a farmland with cult groups which culminated in the death of Ugochukwu. It is worthy of note that the farmland where he died is far away from the land where Stars University is located and does not belong to Prince Ned Nwoko. The murder case is with the Police and it is of no connection whatsoever with Prince Ned or his family.

There are other cases which were either blatantly falsified or twisted out of context by Azuba Jebose to serve his dubious intent. I don’t have the luxury of time to debunk all those fabrications here but my candid advice for people like Jebose who live abroad is to devote their time to more noble things. They should stop hurling missiles at notable achievers in society ostensibly with the hope of being invited for ‘settlement’. I can stress with all the sinews in me that Prince Ned is not a man who yields to cheap blackmail by merchants of slur campaign. I just have to draw a line here on Azuka Jebose’s irritant distractions and focus on more germane issues.By all ratings, Prince Ned Nwoko is an illustrious son who deserves the support and encouragement of the people, not antagonism. His audacious bid is to open and put the community and district on national and global limelight. Despite his sophistication and dizzying international stature, his love for his root has never been in doubt. His plushy mansion in Idumuje-Ugboko is an architectural and tourist marvel which remains an eloquent testimony of the high regard he has for his place of origin.
The stratagem of hirelings to blackmail Prince Ned is borne out of nothing but envy, petty jealousy and subterfuge by some local forces. However, the Ned persona is sophisticated and tenacious. It is an enduring international brand which straddles and stretches far wider than local bounds.

It’s been three months, where are Trump’s ventilators promised Nigeria?