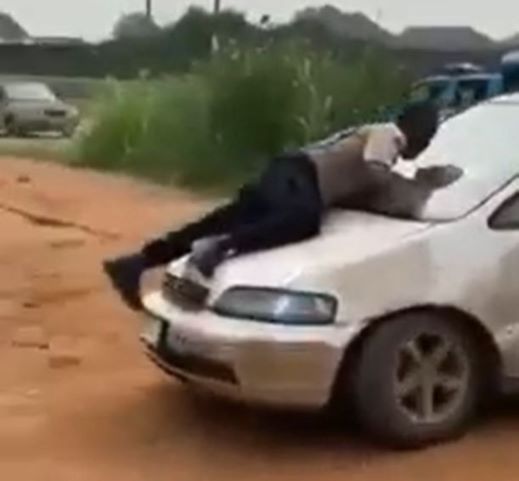 The Corps Marshal, Federal Road Safety Corps, Dr Boboye Oyeyemi has orders the prosecution of the driver vehicle (Honda Odessey) who had a marshal on a vehicle bonnet in viral video circulating in the social media

Kazeem said the driver was attempting to avoid arrest having been accosted by the team for committing the offence of seatbelt use violation.

He further stated that the Corps Marshal is deeply saddened by the development and has ordered the entire team to be recalled to Lagos State Sector Command for investigation and appropriate disciplinary actions in line with the Corps’ regulations; while the erring driver faces immediate prosecution in a court of competent jurisdiction.

“It is expedient to state that the Corps’ operational guidelines do not allow personnel to stand in front of any vehicle to effect arrest at the detriment of their own safety while stopping the vehicle.

“For emphasis, a staff does not need to commit suicide while stopping an offender that is already on a suicide mission, because every arrest of an offender is expected to be done within safe and professional limits in line with their training and operational guidelines and not to unnecessarily put their own lives in danger while attempting to arrest a fleeing offender.

“That is why the Corps has been deploying technology to track all cases of absconding recalcitrant drivers of this nature and bring them to justice,” Kazeem said.

He warned motorists to note that the above scenario is not a guarantee for drivers to continue to disobey traffic laws and exhibit such dastardly acts that put the lives of law enforcement agents at risk.

Kazeem said the Corps will utilize every legal option within its powers to arrest and prosecute the absconding dangerous driver who having realised his folly, abandoned the vehicle and took to his heels.