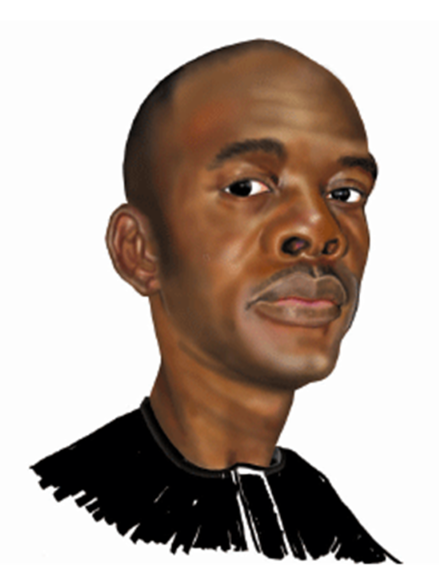 Six months ago, an uproar in the Senate reverberated across the country when Senator Enyinnaya Abaribe called on President Muhammadu Buhari to resign.

Abaribe, Senate Minority Leader, made the call during plenary on January 29 when the Red Chamber of the National Assembly (NASS) discussed a motion seeking the restructuring of Nigeria’s security architecture because of current challenges.

Two things informed his call. First, Buhari’s media aide, Femi Adesina, had taken umbrage at the Christian Association of Nigeria (CAN), labelling it a political party for condemning killings by Boko Haram in general and the gruesome murder of a priest in particular.

Second, Buhari had expressed surprise and shock at the level of violent crimes in the country where he is the Commander-in-Chief of the Armed Forces.

While many Nigerians at the time called for the sack of Service Chiefs, Abaribe thought otherwise.

“The reason we re-elected them is that they continued to tell us that they had the key to security,” Abaribe said mockingly.

“When you want to deal with a matter, you go to the head, so we will go to government and ask this government to resign because they can no longer do anything.”

At this stage, the Senate President Ahmad Lawan, who has done everything to prove his personal subservience to Buhari and subjugation of the Senate to the whims and caprices of the executive, interjected, subtly threatening Abaribe by raising the red flag of hate speech for airing his opinion on the floor of the hallowed chambers where he has immunity.

“Let me remind you once again that Nigerians voted for APC in 2015 and because they saw improvement in their lives, they voted APC again in 2019. I don’t want to be partisan and advise against hate speech,” Lawan warned.

Sheer red herring! Of course, that is not true. There has been no improvement in the quality of life of Nigerians under Buhari’s watch. Undeterred, Abaribe concluded: “Government even said if ‘we don’t perform, stone us,’ we are going with the stones to stone them now.”

And all hell was let loose. The Abia Senator was called names. He was branded a Buhari-hater and threatened with even physical violence. Some viewed his patriotic call from an ethnic prism.

Because he is Igbo, the people stereotyped as naysayers, they concluded, nothing better should be expected. They disparaged the messenger and ignored his message.

Abaribe shrugged off the attacks, insisting that time will bear him out. That time has come. Six months down the road, the chickens of insecurity have come home to roost.

With the democratisation of insecurity in Nigeria, Buhari’s home state of Katsina has become the new epicentre. Talk of poetic justice.

Can anyone be blamed for extrapolating that what is going on in the North West in general and Katsina State in particular is a fitting and deserved retribution for a president whose lack of attention to security matters and empathy for victims is legendary?

Last month, Katsina youths joined the chorus when, in the wake of the June 9 invasion of the state by armed bandits – who killed over 40 civilians, raped many women and abducted dozens of youths and children – they stormed Katsina Government House with an unambiguous message to Buhari and Governor Aminu Masari: “Buhari and Masari resign if you cannot protect us.”

Masari, apparently aware of the mess inept leadership, including his and Buhari’s, has plunged Nigeria into, lamented: “I don’t know what to tell them. I cannot look at them in the face because we have failed to protect them, contrary to our pledge to ensure the security of lives and property throughout the state.

“I never expected the behaviour and the attitude of people living in the forests – the bandits – which is worse than that of animals.”

But that is begging the issue.

Who are these people living in the forests? Who are these so-called bandits? Are they spirits or human beings? Are they Nigerians? Are they invincible? Why is it that despite Buhari’s several ultimatums to the security chiefs, these so-called bandits are yet to be flushed out of the forests? Why are there so many ungoverned spaces in Nigeria? What is the use of any government that cannot protect the people and their properties from hoodlums?

But even as Masari admitted that they have failed, a vengeful presidency went after the youths, arresting their leaders and ferrying them to Abuja. Such highhandedness cannot silence the calls for the Buhari government to live up to its constitutional responsibility of securing the lives and properties of the citizenry.

And it didn’t silence the calls because the dire security challenges can neither be wished away nor mitigated by propaganda as the Senate’s resolution on July 21 calling on the Service Chiefs to either resign or be sacked, amply demonstrates.

The resolution was adopted by the lawmakers after considering a motion by Mohammed Ali Ndume, chairman of the Senate Committee on Army, where he gave a chilling account of activities of bandits and Boko Haram terrorists in the North.

“Just recently, 24 soldiers were ambushed and killed along Maiduguri-Damboa road in Borno State, 19 were wounded and nine were declared missing in action.

“In Katsina, soldiers were also ambushed and killed, while several others were wounded and the number of casualties is not known,” Ndume, who hails from Borno State, agonised, reminding his colleagues of the implication of over 200 soldiers voluntarily resigning from the army, as it happened recently.

The presidency immediately poured cold water on the call, reminding the lawmakers who the boss is.

“The Senate Tuesday adopted a resolution calling on the service chiefs to resign or be sacked due to the multi-pronged security challenges in the country,” the presidency fired back with uncharacteristic speed and cynical gusto.

“The presidency notes the resolution, and reiterates that appointment or sack of Service Chiefs is a presidential prerogative, and President Muhammadu Buhari, in his capacity as Commander-in-Chief of the Armed Forces, will do what is in the best interest of the country at all times.” Full stop!

Nobody is begrudging the President of his powers. So, flaunting it does not raise the bar of discussion. The important question, given the prevailing circumstance, is what does Buhari consider to be the best interests of Nigeria? Is he the only person who knows or can define what those interests are?

The presidency’s response is condescending, no doubt, but it serves the lawmakers right. They have so cheapened the potency of the powers of the legislature by groveling before the executive and fawning on a president who is obviously on a mission of state capture.

The full weight of the mischief in the presidency’s push back is not the reluctance to fire Service Chiefs whose best performance, the president considers, rightly, is not good enough to secure the country, but the illegality of retaining them in office beyond the mandatory retirement age of public servants.

The Chief of Army Staff, Lt. Gen. Tukur Yusuf Buratai, was commissioned a Second Lieutenant on December 17, 1983 into the Infantry Corps of the Nigerian Army. He has spent 37 years in the army, overshooting his service time by at least two years.

The same applies to the Chief of Air Staff, Air Marshal Sadique Abubakar, who joined the Nigerian Air Force as a member of Cadet Military Training Course (CMTC 5) 41 years ago in November 1979.

The Senate’s call for the sack of the Service Chiefs was a waste of time because it was obvious that Buhari was not going to heed the call.

In February when the call for their sack grew louder, the presidency warned that “a group of politicians and beneficiaries of the Boko Haram insurgency is right now paying for people to join their planned protest against our country’s Service Chiefs.”

Besides, the problem is not with the Service Chiefs. Insecurity is simply a failure of leadership at the highest level. The state of affairs – socially, politically, economically – under Buhari’s watch has become desperate.

Nigeria is in dire straits as death walks on all fours with a taunting swagger that leaves in its wake a haunting nimbus. And it can only get worse as long as Buhari remains president.

If Buhari “will do what is in the best interest of the country at all times,” as he claimed on Tuesday, then he should resign.

The Mago-Mago in Magodo! By Olusegun Adeniyi

APC, PDP, and the Mafia Game, By Olusegun Adeniyi

The $418 Million Question, By Olusegun Adeniyi