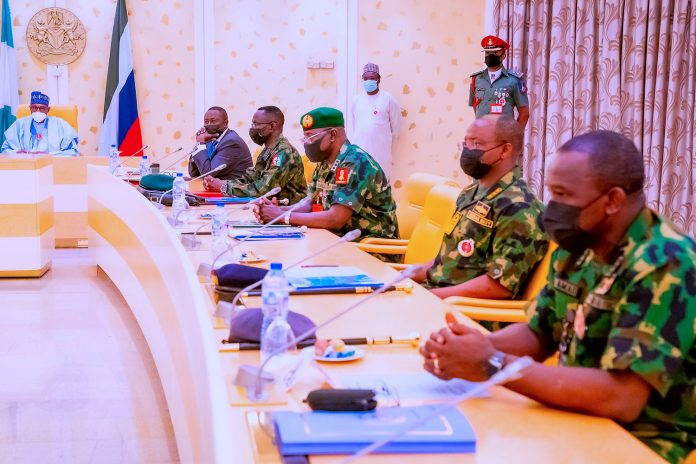 President Muhammadu Buhari has again directed security agencies to urgently address the resurgence of kidnapping and other crimes on the Abuja-Kaduna Highway and on other roads across the country.

The Minister of Interior, Rauf Aregbesola, said the president gave the directive while presiding over the meeting of the National Security Council, held at the Presidential Villa, Abuja, on Thursday.

Aregbesola, who addressed State House correspondents at the end of the meeting, said the police and other security agencies had been mobilised to intensify surveillance and patrols in pursuing of the criminals.

“Abuja-Kaduna belt was discussed specifically, but we appreciated the fact that we are in the season of festivity.

“All agencies committed to providing security for Nigeria and the maintenance of law and order have been ordered to improve on their activities.

“They have also been ordered to intensify surveillance and minimise, if not eliminate any threat to law and order anywhere in Nigeria,’’ the minister said.

He said President Buhari particularly ordered the armed forces and other security agencies and intelligence organisations, not to rest on their oars.

This, the president noted, was in spite of the progress and efforts being made to eliminate insurgency, banditry, kidnapping for ransom, and all the other criminalities.

Aregbesola quoted the president as saying that: “we are not yet where we should be. Nigerians deserve to live in peace. And until we achieve that, we will not rest.’’

The minister assured that Nigerians would soon witness serious security improvement as specific orders had been given to all security agencies to tackle security challenges across the country.

He said: “specific orders have been given to all security agencies. We’ll see an improved response to all those challenging the sovereignty of Nigeria in whatever form and creating insecurity anywhere.

“The Council today took a firm decision on what to be done.

“I am convinced that with the renewed charge to our security agencies from the military to the police, to intelligence organisations and all other security forces, certainly Nigerians will feel and live better going forward.’’

The minister said the president was particularly pleased with the way the Nov. 6 Anambra gubernatorial election was conducted.

Former CBN Governor and candidate of the All Progressives Grand Alliance, Charles Soludo, emerged winner in the election after polling 112,229 votes.

Aregbesola said: “the president was particularly happy with the fact that a free and fair election was made possible by the INEC and by the security agencies.

“And that that is a good assurance to all Nigerians that we are committed to promoting democracy; that is in respect of Anambra election.

The minister said the president expressed delight at the election of Nigeria’s AIG Garba Umar, Head of INTERPOL National Central Bureau, as Vice-President (Africa) and Executive Committee Member of INTERPOL.

“The council was briefed about the election today of a Nigerian, AIG Umaru, who emerged out of four other candidates as the vice-president of Interpol for Africa.

“This means that a Nigerian today represents the 54 African nations at the INTERPOL.

“The election took place on Thursday, a couple of hours ago. And he emerged as the vice-president of NTERPOL in Africa, representing the 54 African nations. That too was discussed, appreciated and applauded,’’ Aregbesola said.

Others were the Chief of Defence Staff, Gen. Leo Irabor, and Service Chiefs of the Army, the Navy and the Air Force as well as the Inspector General of Police, Usman Baba.

Before the commencement of the meeting, President Buhari with the assistance of Vice-President Osinbajo decorated Buhari’s Aide de Camp, Col. Yusuf Dodo, with his new rank. (NAN)