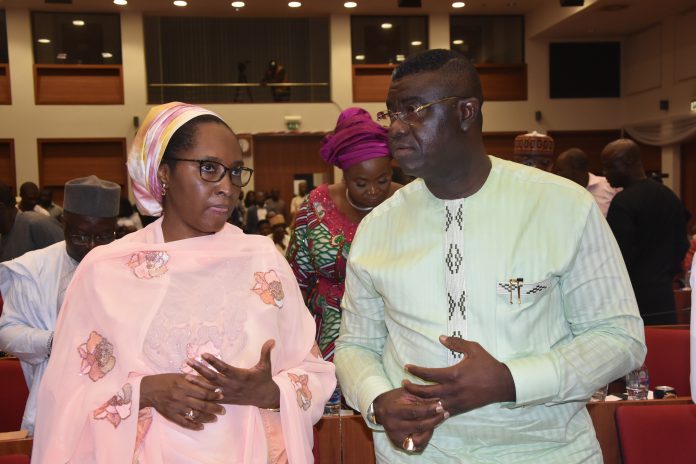 Minister of Finance, Budget and National Planning, Mrs Zainab Shamsuna Ahmed; and, Minister of State for Budget and National Planning, Prince Clem Ikanade Agba, on Wednesday (October 23, 2019), at the Public Hearing on the 2020 Appropriations Bill/FGN Budget Proposals by Senate and House of Representatives Committees on Appropriations at the National Assembly.

The Minister of Finance, Zainab Ahmed on Wednesday revealed plans by the Federal Government to expend  N4.88 trillion for payment of the new national minimum wage and other personnel costs in the 2020 fiscal year.
Ahmed who disclosed this during the National budget public hearing on the 2020 budget estimates at the joint session held by the Senate and House of Representatives, told lawmakers of the present administration’s projected investment of N10.33 trillion into Government Owned Enterprises  (GOEs/Bilateral/Multilateral project tied loans/expenditures.
For the proposed budget deficit for 2020 was pegged at N2.175 trillion (1.52% of the GDP), is expected to be funded mainly by borrowing of N1.594 trillion, comprising of N744.99 billion domestic sources and N850 billion foreign sources (more concessionary financing against commercial financing arrangement.)
On debt servicing, Federal Government proposed the sum of N2.5 trillion representing 23.74% of target expenditure for the incoming fiscal year and N296 billion for the retirement of maturing bond to local contractors, representing an increase of 169.09% from N110 billion for 2019.
The minister affirmed that the country achieved 58% of its revenue target as at second quarter of 2019 fiscal year, explained that the success was largely because some one-off items such as the N10 billion from Oil Joint Venture Asset restructuring and N320 billion from revision of the Oil Production Sharing Contract legislation/terms are yet to be actualized.
Breakdown of the actual revenue accrued to government’s coffer between January and June 2019 showed that total sum of N900 billion (49%) was from Oil revenue; N349.11 billion (86%) from Company income tax; N81.36 billion (71%) from Value Added Tax while N184.10 billion (100.47%) was from Customs Collections.
“Fiscal deductions by NNPC for federally funded projects also exceeded target.”
By Emman Ovuakporie
tng
Please follow and like us:

Amnesty International asks government to investigate killings of 22 travellers in...