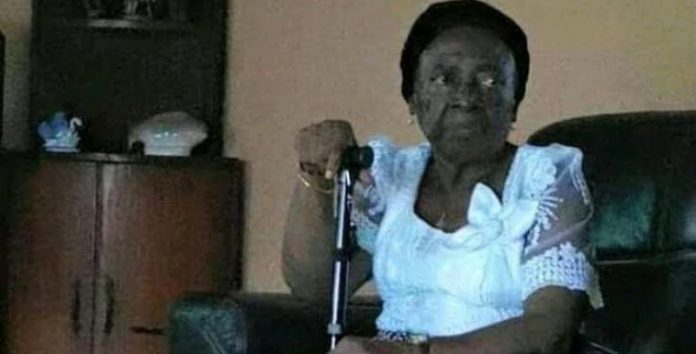 Ovuleria Uredia Nwogbo, wife of Chief Zebrudaya Okorigwe Nwogbo, who played the lead roles in the The Masquerade, a one time television drama series that kept viewers glued to their television sets, is not dead, as being reported in many quarters.

The ace actress, real name Lizzy Ovueme, was reported on social media and some online publications to have passed on, with Nigerians pouring out encomiums and generally mourning her.

But it has turned out that she is hale and hearty, according to The Nation Newspapers, which reported speaking with her on phone from her Port Harcourt home indicating she is alive, adding that though she did not speak much on phone, her voice sounded clear and sharp.

The paper also quoted Chief Chika Okpala, who acted as lead character Chief Zebrudaya Okorigwe Nwogbo alias 4.30, in The Masquerade earlier confirmed that Ovularia is not dead and is alive ‘because I just spoke with her few minutes ago before your call came in. She is okay in Port Harcourt.’

Ovueme acted as wife to ‘Zebby Darling’ Chief Zebrudaya in the drama that ruled the Nigerian television screen in the late 70s.

Before she joined The Masquerade as one of the pioneer casts, she belonged to a group called Evil Checkmate House, from where she was introduced me to the late James Iroha who was producer of The Masquerade.

Unfortunately, despite the fame that came with her role in the drama series, she lamented that she was seen among women folk as an infidel. She recounted how N10 per episode she earned from the soap opera helped in the training of her four children who are now graduates.

According to her, one other challenge she faced was that the role of Ovularia exposed her to public eye. “Anything I did was news. That was a challenge. Every time I am on guard to watch what I say and how I dress. It keeps me in check in the public eye,” she recalled in a report.

Davies Ofor (Clarus), James Iroha (Gringory), Claude Eke (Chief Jegede Shokoya), Christie Essien Igbokwe (Apena) are among members of the original cast of The Masquerade that have passed on.

Decision to lift 100 million Nigerians out of poverty not accidental,...