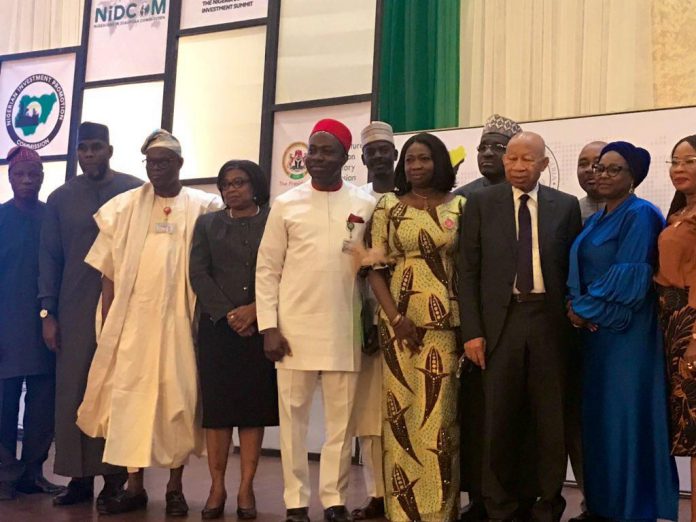 R-L: Dabiri-Erewa (4th) Prof Soludo (5ft) and other dignitaries in group photograph at the Summit*

Former Governor of Central Bank and member, National Economic Advisory Team, Prof Charles Soludo has told Nigerians in Diaspora that it is in their enlightened self interest to contribute to the prosperity of the country.

Speaking in a keynote address on Wednesday at the Aso Rock Villa Banquet Hall, during the opening ceremony of a two-day Nigeria Diaspora Investment Summit 2019 , Soludo said it was wrong to regard Investment in the homeland by Diasporians as acts of charity.

He said cases of racism and xenophobia where Diasporians operate from has made it imperative for Nigerians abroad to have a prosperous country they can return to if and when the need arises.

The former CBN governor said this was the case the Jews learnt in a hard during their persecution which eventually culminated in the holocaust.

He however said to encourage Diasporians to invest in the homeland, governments in Nigeria must ensure security of such Investments.

He therefore urged that the current policy of ensuring ease of doing business in the country should be vigorously pursued.

Earlier on in her address of welcome, Hon . Abike Dabiri-Erewa noted that this was the second edition of the Summit. She recalled that last year’s brought 3,000 investors.

Saying that Nigerians make up the best of talents worldwide, the NIDCOM boss said that home, and abroad, it is the collective effort of everyone to build Nigeria into the country we all desire.

Governors to know fate on May 23 in suit challenging regulation...

“We are not looters”: Senegalese protesters target French retailer

As in Zamfara, two other states, Yobe shuts all boarding schools

Just In: Roman Abramovich puts Chelsea up for sale through a...

Senate passes 49 out of 68 constitution bills