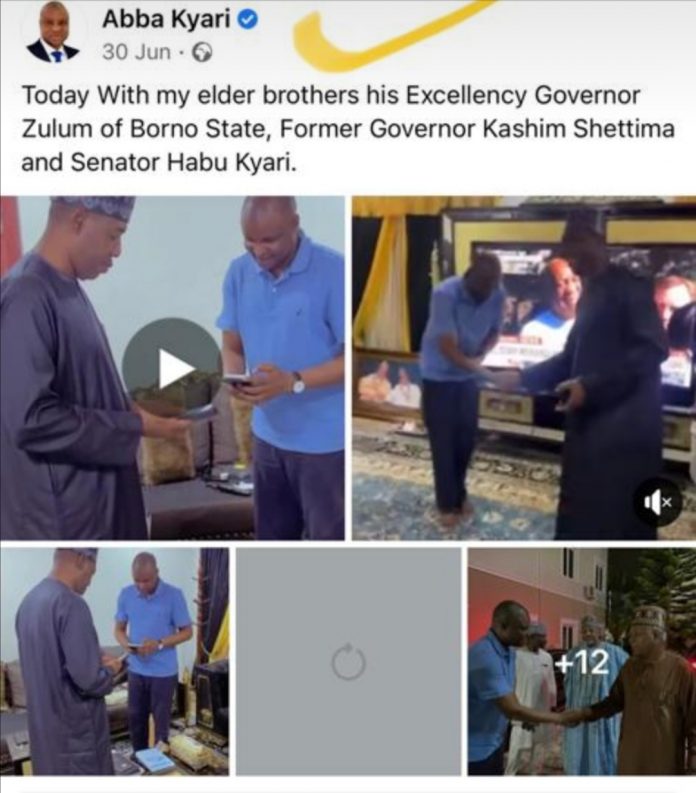 Borno State Governor, Prof. Babagana Zulum and his predecessor, Senator Kashim Shettima have distanced themselves from embattled “Supercop” Abba Kyari, insisting that they have not met with him recently.

A posting on the Facebook of Abba Kyari, who hails from Borno State, has videos and photo splashes of him with some prominent politicians in the state among them the two indigenes of the state, Zulum and Shettima with the writing: “Today With my elder brothers his Excellency Governor Zulum of Borno State, Former Governor Kashim Shettima and Senator Habu Kyari.”

But in a reaction to the Facebook posting, both Zulum and Shettima denied recently meeting with Abba Kyari, who was few days ago suspended from the Nigeria Police for his indictment in a fraud case at an American court alongside Ramon Olorunwa Abbas, also known as Ray Hushpuppi now standing trial.

A statement by the spokesman to the governor, Mallam Isa Gusau on Wednesday said both Zulum and Shettima never even know the residence of the embattled Deputy Commissioner of ypolice, talk less of making an appearance.

Gusau alleged that the said video in circulation was recorded by some associates of Abba Kyari at the residence of Senator Kashim Shettima in Abuja on June 30, 2021, when Abba Kyari paid an empathy visit to Shettima following mischievous circulation of rumours that the Senator had died in the UK.

He said the embattled police officer had himself shared the same video on his verified facebook wall on June 30, shortly after he visited Shettima.

He added that Kyari who hails from Borno State and in Shettima’s constituency visited the former Governor to wish him well like many others had visited the Senator during the time.

Gusau released a video of some sympathizers who had also visited the Senator the same period, which showed the senator receiving them in his house, the same place being described as Abba Kyari’s house.

Gusau said people need to take note of the TV behind Zulum and Abba Kyari with a CNN breaking news on the release of American Comedian actor, Bill Cosby, which, as can be verified by anyone online, happened on June 30, 2021.

The spokesman however called on Abba Kyari to issue a similar clarification as he had promised when he called his attention to the misrepresentation given the fact it was Kyari himself who took that video and released it on his Facebook page on June 30, 2021.

US hopes to return diplomats to Kyiv by end of month