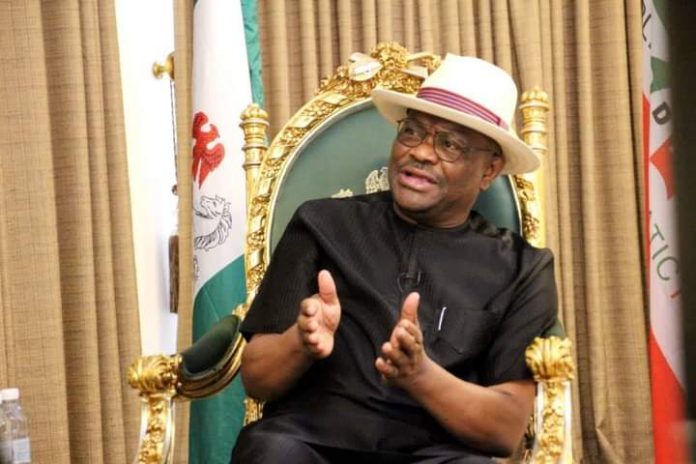 Rivers State Governor, Nyesom Ezenwo Wike, has described the allegation that he ordered the Nigerian Army to kill Igbos in Oyigbo Local Government Area as a politically-motivated falsehood.

He maintained that curfew was imposed in Oyigbo to restore calm after members of proscribed Indigenous Peoples Organisations of Biafra (IPOB) killed 6 soldiers, 4 policemen and destroyed all police stations and court buildings there.

Governor Wike gave the explanation on a live television programme in Port Harcourt on Monday.

He said the narrative that Igbos were being killed by the military was intended to shift attention from the despicable activities of IPOB in Oyigbo, which is a boundary area adjoining Abia State.

“I know that this is not the first time, IPOB has used Oyigbo as launching ground. The security agencies are aware. IPOB added a new dimension this time. They killed 6 Army Officers and burnt one. They killed four Police Officers. They destroyed all the Police Stations and Court Buildings. What offense did we commit as a state?

“I imposed curfew to restore calm. I proscribed IPOB activities anywhere in the state. Don’t forget that the Federal Government had declared them a terrorist group. It is not the entire Igbos that believes in IPOB activities.

“So, it’s not true that I order the military to kill Igbos in Oyigbo. When did I become a friend to the military? So what about the Igbos living elsewhere in the state are they also being killed?”

He further said: “I have no relationship with the Army or the Police, I do not command them. They change Commissioner of Police every time. How will I begin to direct the Army that I do not give instructions?”

The governor bemoaned IPOB’s effrontery to rename a local government in the State and hoist its flag in a public school in Komkom Town.

He said: “I will not fold my arms and watch criminals destroy my state, if those few criminals are Igbos then they should know that I will not allow them.

“They made attempt to rename a local government in my state. That alone is a signal. I will not agree to that. I know who is doing all these; who has told them to rise, protest against Wike.”

The governor stated that the State government had no regrets against its stance on IPOB, already designated as a terrorist organisation by the Federal Government.

According to him, “even the South-East Governors have never supported IPOB” and wondered why a governor from the Niger Delta should tolerate the group.

He revealed that security agencies during their search of some residents in Oyigbo, saw shrines with IPOB flags and Nnamdi Kanu’s picture.

He maintained that if IPOB was allowed to operate from Oyigbo, they would soon overrun the State.

The governor said the government had commenced moves to replace all the property destroyed by the group during the protests, regretting that the damage had left huge financial burden on the state.

In addition, he said the State had decided to compensate each family of the killed security personnel with N20 million to cater to the welfare of the bereaved widows and their children.

He further said that the EndSARS protest and its aftermath would have been averted if the Federal Government had not dismissed the alarm he earlier raised on the activities of SARS and reduced it to mere politics.

“These losses in the aftermath of the protest are unfortunate. Recall that we started the cry against operations of SARS. We asked for reform. But they politicised the issue because they use it to kill and intimidate us.

“Here, the minister always used SARS to cause mayhem under the leadership of Akin Fakorede. We suffered a great deal. At a time, the entire National Assembly Election was cancelled. But we put faith in God who owns the state. We triumphed eventually,” he said.

One feared dead, many reportedly injured as police, shiites clash in...