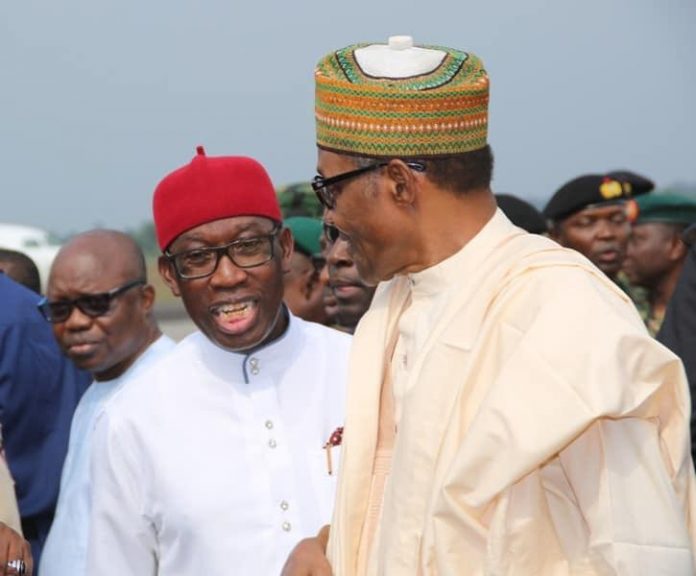 Delta Governor Ifeanyi Okowa has said politics was behind President Muhammadu Buhari’s refusal to sign the Electoral Amendment Act before the 2019 general election.

He described politicians generally as “selfish” , adding that politicians deliberately avoided actions that was capable of undermining their personal interests, even if it was detrimental to common good.

Okowa expressed optimism that the Electoral Act would be signed on time for the next election.

He said, “The Electoral Act was not signed because of politics, politicians are selfish. If you watch what is going on in America, President Trump does not want the mailing votes to be counted if they arrive after 8pm on election day. But members of the Democratic Party think otherwise.

“That is the way of politicians, always be conscious to avoid taking actions and decisions that would undo you. So it was not signed because of politics but I know that it will be signed this time.”

The governor who spoke in Asaba while addressing youths in Delta North at a town hall meeting following the #EndSARS protests told the youths that politics was about learning along the line and picking the good things seen in good politicians and throwing away the bad ideas.

“I agree that there is need to re-work our electoral processes but we need to re-engineer our minds because we have lost it and it’s time we began to talk to ourselves.

“You must truly begin to organise yourselves in truth with a common goal and focus and whoever you select must stand for the common good of others.

“We are building a new Nigeria with the youths and we must shun acts capable of reducing us when we leave office.

“We will continue to allow youths, including females, to be part of the governance process because in learning you are building yourself for the future.

“If you are a youth and you want to be active in politics you must respect your leaders and you must learn to pray a lot.

“I am encouraged to see many more youths go into politics and I hope it is for the right reasons. I know we have some youths representing their people but are they showing examples to others?

“The act of leading requires deep thought, sincerity and leadership quality because there is a difference between an orator and the person who is able to lead,” he said.

The governor said the ongoing creation of new political wards by the Delta State Independent Electoral Commission (DSIEC) was to correct the imbalance in some local government areas, saying that the existing law stipulates that each local government should have a maximum of 20 wards.

Commissioner for Youths Development, Ifeanyi Egwunyenga, had said the town hall meeting was designed to establish a sense of communication between the government and the youths in realisation of the critical role they played in nation-building.

Participants at the meeting agreed that the #EndSARS protests were as a result of impunity of security operatives, particularly the extortion and brutality by the disbanded SARS and corruption at all tiers of government, resulting in hardship in the country.

The youths also called for the revamping of all farm settlements in the state to engage more youths in agriculture.