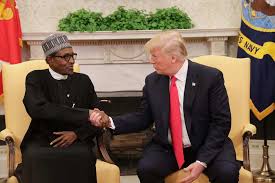 President of the United States, Donald Trump has reassured his Nigerian counterpart, President Muhammadu Buhari that his country will help Nigeria to “dismantle” the infamous Boko Haram terrorists.

In a letter to President Buhari in solidarity over the 59th Independence anniversary celebration which comes up tomorrow, October 1st,  President Trump described Nigeria as among the America’s strongest partners in Africa.

“On behalf of the American people, I extend our warmest greetings and congratulate you on the 59th anniversary of Nigeria’s independence,” the Trump said.

“We are allies in the global battle against terrorism, and we want to see Boko Haram and ISIS-West Africa driven out of the region and other insurgencies like them dismantled,” he wrote.

“The United States welcomes efforts by your administration to diversify opportunities for your talented, creative, and hardworking people to the benefit of both our countries, Africa, and the world.”

House of Reps passes bill for establishment of Federal University in...