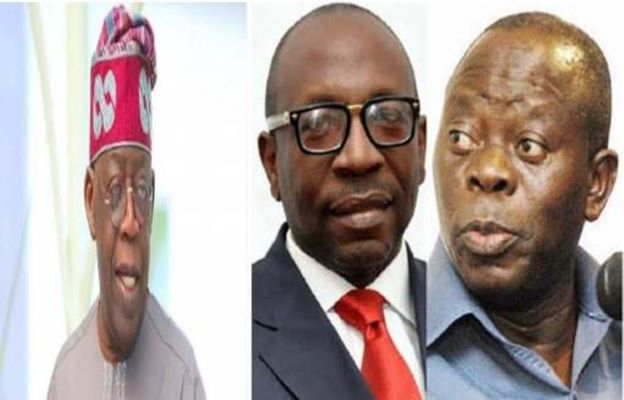 …..praises Oshiomhole’s equanimity, loyalty to party and President
The National Leader of the All Progressives Congress and former Governor of Lagos State, Asiwaju Bola Tinubu, has joined the President in calling for broad support for Pastor Osagie Ize-Iyamu, the party’s candidate for the Edo Governorship election in September.
He made this known in a statement released today in reaction to the National Executive Committee [NEC] meeting held earlier this week in Abuja where President Muhammadu Buhari’s recommendation for the Edo Primaries to be ratified was unanimously accepted by the leaders of the party, a factor indicative of the broad appeal of Pastor Osagie Ize-Iyamu and the collective support he enjoys within the party as its candidate.
“In Edo, we must rally round our candidate Pastor Osagie Ize Iyamu,” Asiwaju Tinubu said in the statement where he also urged party members to put differences behind and “recommit selves to the ideals and principles on which the APC was founded.”
He said: “We have governorship elections around the corner in Edo and a primary and elections in Ondo. On these important events we must concentrate our immediate energies. In the longer run, we must restore the collegial nature to the party so that it should be in the practice of coming to support the President instead of him having to rescue the party from itself.”
“In Edo, we must rally round our candidate Pastor Osagie Ize Iyamu. In this, Comrade Oshiomhole has a crucial role to play.”
Asiwaju Tinubu who disclosed that he is presently focused on important national issues centered on the formulation of policies to help Nigeria navigate its way out of the rude economic consequences of COVID—9, also praised Comrade Adams Oshiomhole for what he described as his equanimity and loyalty to the APC and President Muhammadu Buhari.
“I believed and continue to believe that Comrade Oshiomhole tried his best. Mistakes were made and he must own them. Yet, we must remember also that he was an able and enthusiastic campaigner during the 2019 election. He is a man of considerable ability as are the rest of you who constituted the NWC,” he said.
“I congratulate Comrade Oshiomhole for his equanimity and loyalty to the party and our President in accepting the dissolution of the NWC. I encourage him, now, to return to Edo State to energize the campaign for the election of Pastor Ize-Iyamu.”
He backed President Muhammadu Buhari and the NEC’s resolution that all legal suits filed by members in matters pertaining to the party be withdrawn and expressed hope that with the decisions passed in the meeting, and the acceptance of all members in good faith, “the APC can assume its proper role of helping this government lead the nation toward enlightened improvement, and the party itself can grow and firmly establish itself as the best, most democratic party in the land.”
Please follow and like us: