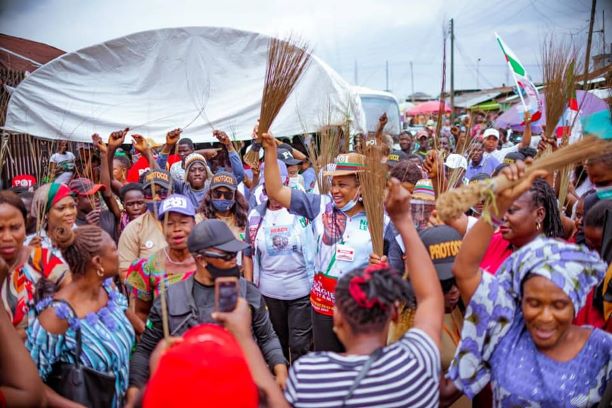 It was pomp and ceremony as Ekiosa market women in Benin received wife of the APC governorship candidate in the September 19 poll, Professir Idia Ize-Iyamu.
The traders launched into songs of joy and wild jubilation on sighting Professor Ize-Iyamu, perhaps sensing that freedom has finally come their way.
Reason: her husband, a man they perceive would end their suffering, oppression and intimidation from the  present government of Godwin Obaseki, appear highly favoured to win the election.
With a pedigree as a man of God with righteous mission and programmes to better their lives, the women could not but jubilate.
One after another the traders spoke about how many of them were arrested and thrown into Oko jail for days till they were able to pay the fine attached to their sentence. 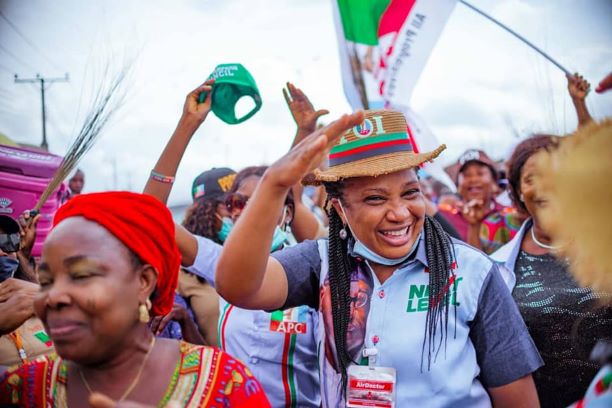 Prof Mrs Idia Ize-Iyamu assured the traders that those horrible experiences they were having now under this present administration would be a thing of the past when the APC gubernatorial candidate POI was elected and sworn in as the next governor of Edo State.
She yet again expounded the SIMPLE Agenda to them Starting from Security to Social Welfare, Infrastructure to Manpower Development and Training, Public Private Partnership to Leader by example and ending with Employment and Empowerment, she told them what they stand to benefit when they cast their votes for POI.
She took time to explain the proper way to vote to avoid void votes on the election day as every vote should count.
The traders were encouraged to canvass for votes for APC and Pastor Osagie Ize-Iyamu so “the light of good governance would send packing this present darkness in Edo State government House.”
Please follow and like us:

We will remain bullish in our approach to developing Oyo –...