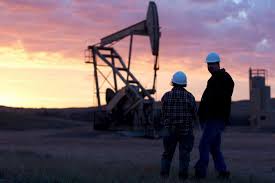 Oil steadied on Thursday due to optimism that the United States and China could resolve their trade dispute, though prices came under pressure from Saudi Arabia’s moves to restore output quickly after attacks on its oil installations.

U.S. President Donald Trump signaled on Wednesday that a resolution to the dispute with China might be near, which could eventually boost fuel demand.

A day after delivering a stinging rebuke to China over its trade policies, Trump said Beijing wanted to make a deal “very badly” and that a deal “could happen sooner than you think”.

“It amazes me that these soothing tones still draw investors in, given how often we’ve heard them in the past. But they can be a needy bunch, seeking constant reassurance that everything is going to be OK.”

On Wednesday, Brent and WTI fell to their lowest since the Sept. 14 attacks on Saudi Arabia.

Prices were weighed down by a surprise 2.4-million-barrel build in U.S. crude inventories last week, and a faster-than-expected recovery of Saudi output after the drone and missile strikes on two of its oil-processing plants.

“The oil market has seemingly returned to business as usual,” said Norbert Ruecker, head of economics and next-generation research at Julius Baer.

“Instead of the attack-related fallout including disruption and geopolitical risks, the soft economy and stagnant oil demand are back in focus.”

THE CRUCIFIXION OF FEMI FANI-KAYODE, By Bolaji Adebiyi