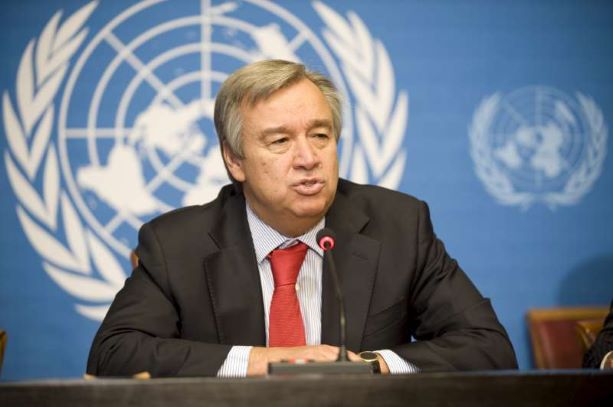 The United Nations (UN) said it had launched an investigation into a viral video showing a couple apparently having sex in one of its official cars in Israel.
According to spokesman of the Secretary-General, Mr Stephane Dujarric, while speaking to UN correspondents in New York on Friday, the organisation was “shocked and deeply disturbed” by the footage.
Dujarric confirmed that the video featured a 4×4 vehicle, containing personnel “likely assigned to the UN Truce Supervision Organisation (UNTSO)”.
The short video shows a woman in a red dress straddling a man in the back seat of the white SUV bearing the “UN” inscription.
With them in the moving vehicle are the driver and a bald-head man sitting on the passenger side in front.
Media reports said the footage was recorded on HaYarkon Street, a major thoroughfare in Tel Aviv, the Israeli capital, although the UN said its authenticity had not been confirmed.
Dujarric said: “We are shocked and deeply disturbed by what is seen on the video.
“The behaviour seen in it is abhorrent and goes against everything that we stand for and have been working to achieve in terms of fighting misconduct by UN staff.
“We became aware of the video a little bit more than two days ago and our colleagues in the Office of Internal Oversight Services (OIOS) were immediately activated.
“Their investigation I know is moving very quickly. We know the location of the incident and the identification of individuals in the video, who are likely assigned to the UNTSO, is close to being completed.
“As part of the UN’s commitment to transparency, the UN will provide updates on the conclusion of the investigation, and any further action.”
According to the organisation, UNTSO, headquartered in Jerusalem, is the first ever peacekeeping mission established by the UN in 1948.
It said the mission comprises military observers to monitor ceasefires, supervise armistice agreements and prevent military escalation.
In a statement, UNTSO said it was committed to the UN’s zero-tolerance policy against any kind of misconduct, including sexual exploitation and abuse.
It reminded its personnel of their obligations to the UN Code of Conduct.
The BBC quoted Ms Heather Barr, Co-director of the women’s rights division of Human Rights Watch’s, as saying the video did not come to her as a surprise.
Barr, who according to the news outlet had worked for the UN in Burundi and Afghanistan, said the UN had a bigger problem than the video.
“That problem is about allegations of sexual exploitation and abuse committed by staff members of the UN,’’ she told the medium.
NAN recalls that the UN received and investigated 175 allegations of sexual exploitation and abuse against its staff in 2019.
Out of the total, 16 were substantiated, 15 were unsubstantiated and all others were still being investigated.
Please follow and like us:

Obaseki felicitates Oba of Benin on birth of new princess