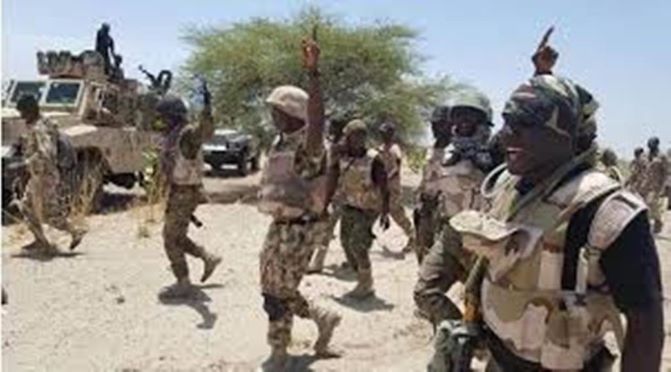 Troops of Operation LAFIYA DOLE have 75 Boko Haram and Islamic State’s West Africa Province (ISWAP) fighters in 17 encounters with the terrorists group across the North-East Theater of operation.

The Coordinator Defence Media Operations also stated that one Gun Truck, one Vehicle Borne Improvised Explosive Device, one Toyota Starlet car and several makeshift structures belonging to the terrorists were destroyed by the valiant troops within the period.

He said one officer paid the supreme price while one soldier was wounded in action.

Enenche said the wounded personnel has since been evacuated to a military medical facility where he is recuperating.

He further stated that 4 BHT and ISWAP criminals including 2 women namely Aishatu Manye and Kelune Mate were captured and later identified to be the wives of the local Boko Haram commander at Gajingi in Madagali Local Government Area of Adamawa State.

Enenche said the troops also arrested one Boko Haram spy named Kawalu during a Jumaat prayer at Michika Central Mosque and one Boko Haram fighter captured in the aftermath of an encounter at Miyanti general area in Bama Local Government Area of Borno State.

The Coordinator Defence Media Operations noted that the troops rescued 35 captives (18 women, 16 children and one adult male) from the BHTs/ ISWAP criminals.

Enenche said the Chief of Army Staff, Lieutenant General Tukur Yusufu Buratai commended the troops for the resilience and patriotism they continue to demonstrate in crushing the remnants of BHTs/ISWAP criminals.

He said the COAS urges them to maintain the tempo against the criminals as they approach the end of insurgency in our country.

Enenche said the Military High Command encourages the troops of LAFIYA DOLE to remain resolute in curtailing the activities of terrorists and their collaborators in the North-East zone of the country.

He said the High Command equally appreciates Nigerians for their support and urges them to continue providing timely information to troops on activities of BHTs/ISWAP collaborators in their respective localities for prompt and effective action.

Trump Plans to Resume His Trademark Rallies in June

Ministry alerts Nigerians to next phase of anti-Pantami campaign