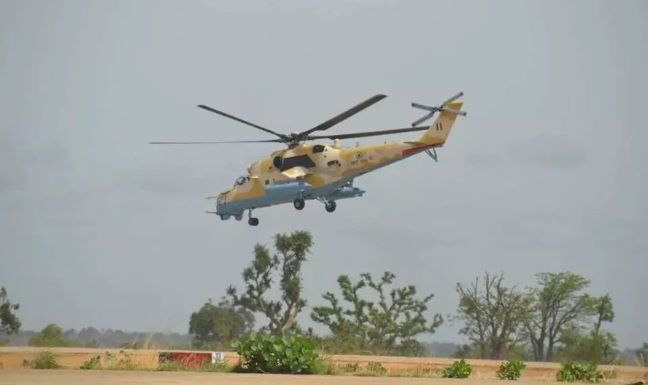 The Air Component of Operation HADARIN DAJI has destroyed some armed bandits’ camps in a forest in Katsina State south of Birnin Kogo along the Katsina-Zamfara boundary area.

Confirming the report, Coordinator Defence Media Operations Defence Major General Headquarters John Enenche said the air strikes were executed as part of missions under the subsidiary Operation ACCORD after Human Intelligence (HUMINT) reports as well as series of Intelligence, Surveillance and Reconnaissance (ISR) missions indicated that some clusters of huts in the area were being used as mini-camps by members of notorious armed bandits’ gang led by one so-called “Adamu Aleiro”.

He said the Air Component dispatched a force package of Nigerian Air Force (NAF) attack aircraft and helicopter gunships to engage the area, leading to the destruction of 3 of the targeted camps, some of which were seen engulfed in flames and several of the criminals were also neutralized in the process.

Enenche said the Chief of the Air Staff (CAS), commends the Air Component of Operation HADARIN DAJI for their professionalism and urges them to remain resolute in the conduct of air strikes whilst continuing to provide close air support for ongoing ground operations in order to eradicate all armed bandits; thus accomplishing the directives of the Chief of Defence Staff (CDS) to restore normalcy in the North West and North Central Zones of the Country.

Demise of Akire’s Queen, a collosal loss to Ikire Kingdom –...