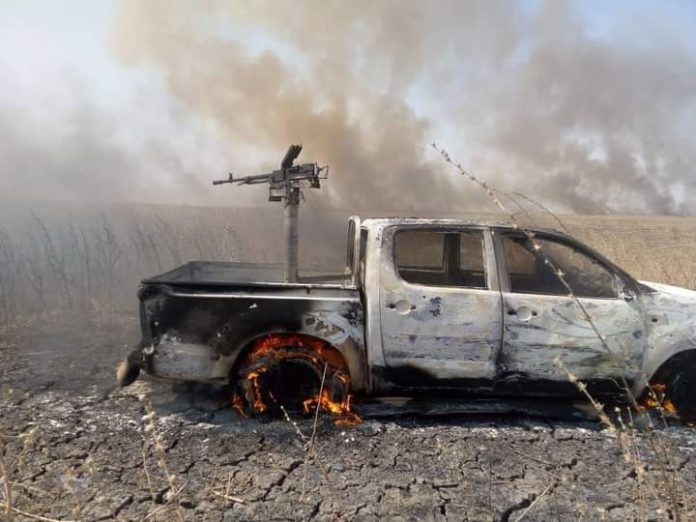 He said the troops had continued to exhibit their dexterity and tactical superiority against remnants of Boko Haram and Islamic State’s West Africa Province criminals within the North East Theatre of operation.

He added that the troops of 401 Special Forces Brigade in a swift reaction knocked out the enemies.

“The superior firepower unleashed by own troops during attack inflicted heavy casualties on the criminals. After the decisive encounter, 4 Boko Haram/ISWAP criminals were neutralized while 2 Gun Trucks, one Anti Aircraft Gun and assorted ammunitions were captured,” Onyeuko said.

He also stated that on 16 December 2020, troops of Army Super Camp 11 Gamboru came under BHT/ISWAP ambush around Kenuba general area.

Onyeuko said troops swiftly dismounted and engaged the criminals in fierce fight thereby forcing the terrorists to withdraw in disarray.

He said in the aftermath of the encounter, five Boko Haram criminals were neutralized while one BHT Gun Truck was destroyed, one Anti Aircraft and three AK 47 Rifles were captured from the fleeing criminals.

Onyeuko commended troops of “Operation FIRE BALL” under “Operation LAFIYA DOLE” for their continued dedication and determination in flushing out remnants of the terrorists from their hideouts.

He also encouraged them not to relent but build on the successes recorded so far.

He assured the entire populace of the North East region of the Nigerian military high command determination to finally rout the remnants of Boko Haram/Islamic State’s West Africa Province criminals from their enclaves in this zone.

He encouraged them to avail the troops with credible information that would
help in the execution of the operation.