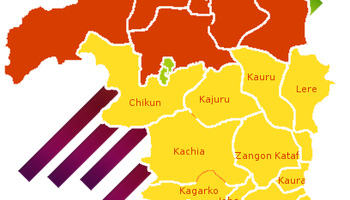 ▪︎el-Rufai directs immediate deployment of relief materials
Security agencies, comprising the military and police, have repelled attacks on Gora Gan community in Zangon Kataf Local Government of Kaduna State.
Confirming the report, the State Commissioner, Ministry of Internal Security and Home Affairs, Samuel Aruwan said the security agencies carrying out internal security operations in parts of southern parts of the state reported that Gora Gan community in Zangon Kataf Local Government Area came under attack on Thursday night.
He said security agencies reported that the community was attacked on several fronts, including the market area and houses stretching towards the Tudun Wada area of Gora Gan.
Aruwan also stated that the troops repelled the attackers, stabilized the general area and retrieved corpses of seven persons.
He identified the corpses retrieved as Peter Akaho (70), Ayuba Steven Sheyin (67), Jummai Ayuba (55), Ishaya Joel (35), Yakubu Saviour (14), Ayuba Goodluck (11) and Patience Ayuba (6).
Aruwan said the security agencies further reported that one person was injured in the attacks, while 13 houses and two shops were burnt in the attack.
He said troops of Operation Safe Haven (OPSH), Special Forces of the Defence Headquarters and police personnel are trailing the attackers.
Aruwan also confirmed that the Kaduna State Government had also received a report of sporadic shootings on the Fadan Kagoma-Kwoi Road in Jema’a local government, adding that a driver was shot, but had now been stabilized.
He said the Governor had directed an investigation into the circumstances leading to the shootings.
Meanwhile, Governor Nasir el-Rufai has condemned the killings of innocent citizens as barbaric and inhuman.
He sent condolences to the families that lost their loved ones and prayed for the repose of their souls.
The Governor also wished the injured citizen speedy recovery.
The Governor has directed the State Emergency Management Agency (SEMA) to take inventory of the damages incurred and provide relief materials with immediate effect.
Please follow and like us: