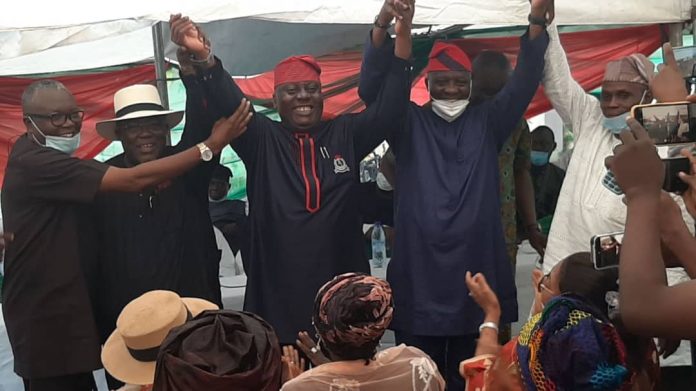 They made their position known during a meeting of leaders of the PDP in Abeokuta, Ogun State on Wednesday.

Selected delegates from across the Southwest States attended the meeting, which was centered on preparation for the zonal congress.

He said; “We are here to show our support for the reelection of Dr Eddy Olafeso as Zonal Chairman, Rev. Bunmi Jenyo as Secretary and others and we should all go to the field and the winners will be from here.”

Addressing the delegates, former PDP governorship candidate in Ogun State, Hon. Ladi Adebutu said the the positions of Zonal Women Leader and Organizing Secretary already zoned to Ogun State would not be negotiated with anyone.

“Here in Ogun State, we have our own rights and our people from Oyo and other States have their rights too. Those rights must be protected and I can assure that those positions of Zonal Women Leader and Organizing Secretary given to us in Ogun State, we must surely get it.

“Ogun State has 85 delegate votes that we will be taking to the Southwest Zonal congress and we will combine the votes with those of Lagos, Ekiti, Osun, part of Ondo and some votes from Oyo State to deliver our preferred candidates. This will be enough to achieve victory.”

He sounded a note of warning against violence, saying whoever that is planning violence at the Zonal Congress should have a rethink.

Also speaking, the chairmen of Ekiti, Osun and Lagos States were unanimous in their demand that delegates must vote to elect candidates of their choice and their votes must count.
They assured that not less than 80 percent of delegates from their States will vote for Dr Olafeso and other candidates presented by the coalition.

Expressing his appreciation, Dr Olafeso said “With what I am seeing here, victory is sure and as you all know, I will never disappoint you all.”

US donates $6.8m to combat human trafficking in Nigeria

FCT police reiterate commitment to protection of life and property

PDP in Ondo is dead, we will calmly nail their coffin...