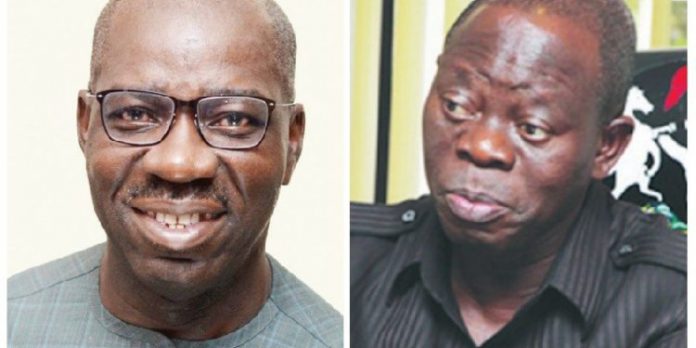 Edo State Deputy Governor, Hon. Philip Shaibu has accused former National Chairman of the All Progressives Congress (APC), Comrade Adams Oshiomhole, of planning to overturn the victory of Governor Godwin Obaseki at the September 19, 2020 governorship election through the Judiciary, just like what transpired in Imo State.

Shaibu, during an empowerment programme for Afemai Youths in Ogbona and Jattu respectively at the weekend, reaffirmed confidence in the judiciary and President Muhammadu Buhari to protect the nation’s democracy and the collective will of Edo people.

According to the Deputy Governor, Comrade Oshiomhole at a public function at his Iyamho residence during the yuletide declared that he was instrumental to the Supreme Court victory of Governor Hope Uzodimma of Imo State and would do the same to upturn the popular victory of Obaseki in Edo State.

Shaibu expressed disappointment over Oshiomhole’s vituperation on the clear victory of Obaseki, stressing that making unguarded utterances to indict the integrity of the Judiciary and to redeem his larger-than-life public image remained ridiculous.

The Deputy Governor, in a statement made available to newsmen by his Media Aide, Benjamin Atu, urged Edo people, especially the youths to take their destiny into their hands by securing Nigerian democracy and the political future of young people.

He further charged youths to desist from making themselves available as instruments of destruction but rather add value to their lives, reassuring that the Edo State Government was committed to assisting and collaborating with young people in the state to make Edo State great again.

According to the Deputy Governor, “The Nigeria Judiciary is known to be amongst the best in the world, therefore, Oshiomhole’s utterance is a mere crying of a beaten baby and he must be made aware that Edo is not Imo State.

“Now that he has vowed to test the collective will of the good people of Edo State by attempting to subvert their will through a questionable judicial arrangement, he will obviously not to be tolerated by the managers of our judiciary.”

He added: “The victory of Governor Godwin Obaseki is a victory for Nigeria’s democracy and it was the first election in Nigeria where all political parties came together to vote for one candidate for the overall development of the state.

“Oshiomhole desirability to create tension to destabilize the state and make it ungovernable should be resisted by the good people of Edo State.”

President Buhari: I am resting in London

#EndSARS AND THE POWER OF TRUTH (2), By Martins Oloja