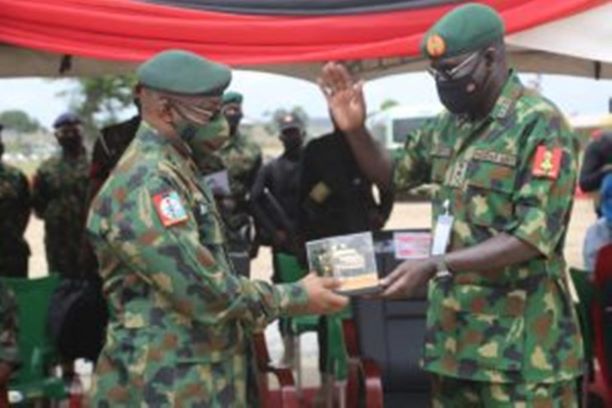 The Chief of Defence Staff, Gen. Gabriel Olonisakin, has given the assurance that banditry in the North West and Central region would soon be a thing of the past.

He gave the assurance when he visited the troops of Exercise Sahel Sanity (ExSS) at the Special Army Super Camp 4, Faskari in Katsina State on Monday.

Olonisaki said the launch of ExSS by Nigerian Army was a testimony of their commitment to address all security challenges facing the country.

He said that the exercise was a real time exercise that would transit into operation aimed at attacking banditry in Katsina, Zamfara and Sokoto as well as Kaduna and Niger States.

“From the briefs I have received and what I have seen here today, there is no doubt in my mind that the scourge of the banditry will soon be a thing of the past and all law abiding citizens would be able to resume their normal lives.

“The past five years of our fight against insurgency, banditry and other criminalities in our nation, the armed forces of Nigeria constantly re-strategise and develop models and approaches as well as restructuring to better position her to address our national security challenges.

“The super Camp concept of the Nigerian Army is one of this effort aimed at repositioning the Nigerian army to better contain these challenges.

“It therefore gladdens my heart to witness ExSS which is already achieving the much desired result put together by Nigerian army from its super Camp in Faskari,” he said.

Olonisaki, however, assured the Chief of Army Staff of the support of the Defence Headquarter towards achieving the objectives of the exercise.

He commended the Nigerian Army for its innovative approaches to the myriad of security challenges across the country with support of other security agencies.

According to him, providing this much needed secured environment, we must continue to strengthen the existing synergy with the services and other security and intelligence agencies to prevent any gaps that could be exploited by these criminals.

“I must commend the resilience and relentless spirit of all the personnel taking part in this important exercise and all other operations across the country to ensure peace and security for our people as well as protect the territorial integrity of our father land.

“I urge you all not to relent in your efforts as you are the last line of defence in our bid to ensure a stable peaceful country.

“Remember that the nation counts on all of us and I have no doubt that the Nigerian Army will acquaint itself creditably by routing all forms of banditry during the ongoing exercise,” he added.

He also congratulated Buratai for his fifth year anniversary as the Nation’s Chief of Army Staff.

Earlier, Buratai said that tremendous successes had been achieved within the few days that ExSS commenced, adding that a number of bandits had either been arrested or eliminated.

According to him, there have been clearing of bandits, recovery of rustled cattle, recovery of arms, kidnapped victims being rescued and host of other criminal activities that have been stopped.

“We have also reduced or arrested quite a number of the informants and logistics suppliers of these bandits and their collaborators in the cities and villages here in the North West.

“We are just beginning and we want to assure Nigerians that this operation that is ongoing will bring about very reasonable state of security in the North West.

“We are not only restricting ourselves to the North West, concurrently , we are carrying out operations in the North Central especially Kaduna and Niger States.

“It is very important that we take note and we will continue to carry out our responsibilities diligently,” he said.

Buratai also disclosed that today being July 13 marked the fifth year of their appointment as service chiefs and congratulated Olonisakin for their successes so far. (NAN)

Just in: FG crashes data price by 50 per cent