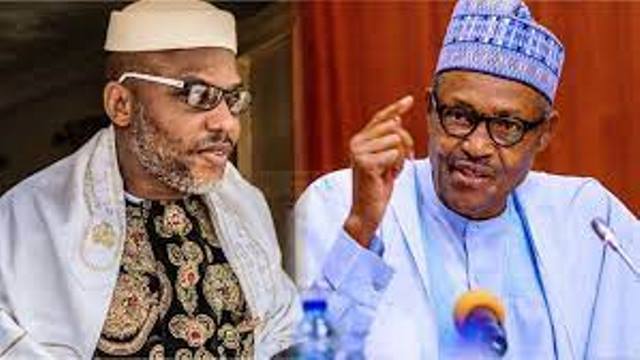 Minister of Justice and Attorney General of the Federation, Abubakar Malami, on Wednesday, put a freeze on the prospects of a political solution that could lead to the early release of the leader of IPoB, Mazi Nnamdi Kanu.

He stated when he appeared on Channels Television that there was no no such political solution on the table as of now.

There have been hopes in recent times that Kanu might be released as a consequence of political solution.

The hopes of stakeholders were raised recently when some notable Igbo leaders, led by First Republic Minister of Aviation,  Mbazulike Amechi, went to Aso Rock to plead with President Muhammadu Buhari on Kanu’s behalf.

Though Buhari said it was a difficult decision to make, he, however, left the door open for a possible political solution.

Read him: “You’ve made an extremely difficult demand on me as leader of this country.

“The implication of your request is very serious. In the last six years, since I became President, nobody would say I have confronted or interfered in the work of the Judiciary.

“God has spared you, and given you a clear head at this age, with very sharp memory.

“A lot of people half your age are confused already. But the demand you made is heavy. I will consider it,” Buhari had told the 93-year-old Amechi and his delegation.

But speaking on Wednesday night, Malami said the trial of Nnamdi Kanu would go on as no political solution was on the table.

“Certainly, one thing I can tell you clearly is that the issue of pardon, out of court settlement or associated settlement is not right on the table.

“It is a bridge I enjoy crossing when I get there. I have unfortunately not got there yet.”

Asked if he would be willing to cross the bridge when he eventually got there, Malami said, “Well, it depends on how deep I find the waters at the bottom when I get to the bridge.”

Malami also said it was not true that the Federal Government was reluctant in naming those it earlier claimed were sponsors of terror in the country.

He said the government was only taking its time.

He stated: “One thing that I think you need to take into consideration is that investigation is still ongoing and the fact that a lot of arrests were made.

“With the fact that judicial orders for the detention of those that have been arrested have been obtained, it is indeed out of place to conclude that nothing is being heard on the matter.

“Work is in progress. It will continue to be in progress and certainly we will do the needful at the right time.”

Alluding to the judicial order declaring bandits as terrorists and how how long it took to get to that point, Malami said the issue of exposing funders of terrorism is taking the same route.

“The fact remains that we have ever been working. There is no dull moment as far as the process is concerned. So, what I am saying in essence is that it is work in progress. Arrests were made, judicial orders were obtained and, indeed, we will do the needful.

He said both big and small names are involved, including politically exposed and institutionally engaged people, with both local and international connections.
Malami vowed that “no one will be spared as far as we are concerned as a government.”