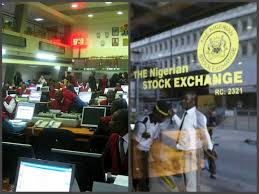 The Nigerian Stock Exchange (NSE) reopened for the week on Monday still on a bearish trend, amid persistent sell pressure.

The downturn was impacted by losses recorded in medium and large capitalised stocks, amongst which are; Nestle Nigeria, Stanbic IBTC Holdings, Dangote Sugar Refinery, Oando and Cutix.

Analysts at Afrinvest Limited said that, “In line with the trend, we expect the bearish performance to continue in the absence of any positive driver.

They said they did not rule out the possibility of some bargain-hunting, driving positive performance in subsequent sessions, never the less.

However, market breadth closed slightly on the positive side with 15 gainers versus 14 losers.

A breakdown of the price movement chart indicates that Livestock Feeds led the losers’ chart with 7.14 per cent to close at 39 kobo, per share.

Conversely, UACN and UAC Property Development Company recorded the highest price gain of 9.09 per cent each, to close at N6.60 and N1.08 per share respectively.

John Holt followed, gaining 8.93 per cent to close at 61k per share.

Similarly, total volume traded depreciated by 6.7 per cent with an exchange of 290.49 million shares worth N4.29 billion traded in 2,900 deals.

Transactions in the shares of Guaranty Trust Bank topped the activity chart with a turnover of 128.49 million shares worth N3.38 billion.

US officially rejoins the Paris climate accord

Saraki says some APC bigwigs will soon move to PDP