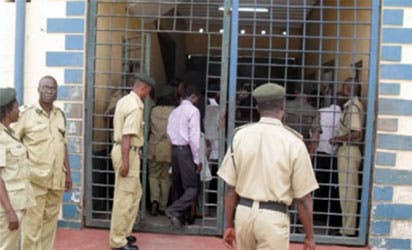 The Nigerian Correctional Service has said only 84 inmates are left in its custody aftermath of the invasion and setting free of prisoners at the Owerri Custodial Centre.

Gunmen believed to the members of the proscribed Indigenous People Of Biafra (IPOB) are said to behind the invasion.

Authorities of the Nigerian Correctional Centre said on Wednesday that of the people set free by the attackers, 48 were picked up in parts of Imo State with 36 resisting the temptation to flee when the facility was invaded

Enobore said: “As at 1550hrs today, 7th April 2021, the Centre has recovered a total of 48 inmates who escaped in the wake of the invasion thus increasing the number of inmates presently in custody to 84, including those that resisted the temptation to escape during the attack.

“Among the escapees, 11 were recaptured by men of the 211 Nigerian Airforce Base, Owerri, while others either came back on their own volition or were returned by their relations, traditional rulers and religious leaders.”

He said acting on the directives of the Minister of Interior, Ogbeni Rauf Aregbesola, the Acting Controller General of Corrections, John Mrabure, has charged all staff in the command to go after the fleeing inmates and smoke them out of hiding at all cost.

Enabore said Mrabure read the riot act during the interactive session with personnel attached to the Custodial Centre, including those at the State Headquarters.

He said his boss further asked the entire staff to braze up to frontally resist the emerging security challenges confronting the nation and by extension, the Nigerian Correctional Service.

He expressed appreciation to other security bodies in fortifying Custodial Centres across the county and in the “search and recover” exercise.

He equally thanked other individuals and groups for their patriotic disposition in ensuring that those who escaped from custody are safely returned to the Custodial Centre.

He however appealed for more support in this regard in order to keep the hardened criminals among them out of circulation and make the society safe and secure for everyone.

Why I forgave my husband when he cheated twice – Ajimobi’s...