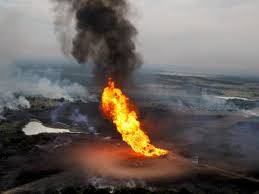 Rev. Sr Henrietta Alokha, the Principal of Bethlehem High School Abule Ado in Lagos and one other female staff of the school have died as a result of the explosion.

According to CKN News, Late Rev. Sr. Alokha in a heroic act, rescued all the children under her care from the fire but died in the process.

Three people have been confirmed dead from the explosion with many others at the hospital with various degrees of injuries.

Many more people are buried in the rubbles as rescue mission is being intensified while firefighters are working to put out the inferno.

The acting coordinator of the Lagos territorial office of the National Emergency Management Agency (NEMA) told the News Agency of Nigeria that the explosion may not have come from a pipeline but from a factory in the area.

“From the information given by officials of the Lagos State Fire Service, who are currently on the ground, the implosion is not connected to pipeline but might have occurred in a factory located in the Abule Ado area.

“Emergency responders are on the ground while others are still on their way to the scene. The situation is under control and we hope to get more information soon to ascertain its cause,” the statement said.

FG reiterates commitment to implementation of Global Compact on Refugees

NNPC assures Nigerians of availability of petroleum products at Easter