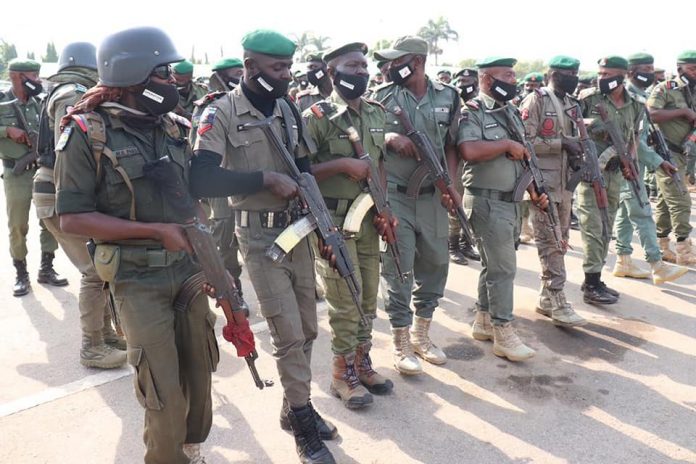 The police have arrested a 28-year-old man for impersonating an officer of the Nigerian Army in Lafia, Nasarawa State.

Timothy Emmanuel, an indigene of Plateau State, was paraded on Friday alongside 60 other suspects arrested for various crimes at the Police Headquarters in the state capital.

He was said to have been apprehended with an AK-49 rifle and two magazines while travelling on Sunday evening on the B.A.D Road in a vehicle suspected to have been stolen.

“Preliminary investigation disclosed that the suspect who parades himself in military camouflage was never enlisted into the army but got the uniform from his uncle who is a military officer serving in Borno State,” the Commissioner of Police in Nasarawa, Adesina Soyemi, told reporters.

“He (Emmanuel) thereafter moved to Jos, Plateau State under the guise of being a military officer and went away with an AK-49 rifle and two magazines of a Nigeria Security and Civil Defence Corps official serving in Jos, when the rifle was left in his custody by the NSCDC officer who went to help him with his registration for the national identity card.”

Soyemi explained that the suspect later returned to Nasarawa and got involved in unlawful activities in Karu and Lafia before he was arrested.

According to him, Emmanuel was being investigated at the State Criminal Investigation Department in Lafia and he had provided some useful information to the police.

Among the other suspects paraded were seven rail vandals, 16 kidnappers, 18 cultists, seven internet fraudsters, and 13 armed robbers nabbed at various locations in the state.

During these arrests, the police recovered five firearms, five mobile phones, two magazines, four ammunition, a laptop, four trucks, and over N400,000 from the suspects.

“I want to seize this opportunity to appeal to all the good people of the state to be more supportive to us in the discharge of our statutory duty, by availing us credible information that will help to proactively neutralise or deal with matters of security in the state,” the police commissioner appealed.

He continued: “I want to assert that the Nasarawa State Police Command will not rest on its oars or revel in its accomplishments so far. Rather, this achievement has galvanised our tempo to clamp down heavily in a consistent and sustained manner on criminals until they are roundly subjugated, and their industry completely liquidated in Nasarawa State.”