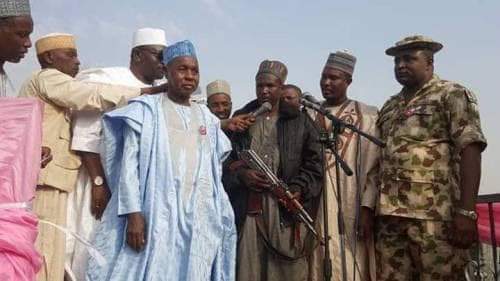 The Peoples Democratic Party (PDP) has asked the All Progressives Congress (APC) to immediately rein in its “bandits” as Nigeria can no longer cope with the daily marauding, kidnapping and wanton killings by the outlaws.

The main opposition party in a statement by the National Publicity Secretary, Kola Ologbondiyan, invited Nigerians to note how the APC has become deflated and dumbstruck since its connections to the escalation of acts of terrorism and banditry, including the gruesome killings and kidnapping of innocent Nigerians for ransom in the last five years, were exposed.

“The APC further betrayed its complicity by always evading demands by Nigerians to explain the whereabouts of the bandits it imported as political mercenaries to unleash violence and help it muscle the 2019 general election.

“The APC had always dodged demands by our party and other patriotic Nigerians asking it to come clean on reports in the public space that many of the bandits ravaging parts of our nation, killing and kidnapping innocent Nigerians are APC political mercenaries which it failed to settle after the 2019 elections.

“Moreover, the APC had further betrayed its links through its manifest show of sympathy to terrorists and bandits, failure to promptly and forcefully condemn their activities as well as its attack on anybody, who condemn acts of terrorism or demand for the release of abductees.

“Our party holds that now that President Muhammadu Buhari has admitted his administration’s failure to rout the bandits, the onus lies on the APC, as a party, to help Mr. President by immediately reining in their bandits and ending their affliction on our nation.

“Is it not a national shame that whereas the Chadian President Idris Deby personally led his troops to rout out insurgents and even freed Nigerian territories and soldiers held captive by terrorists in northern part of Borno state, our President, who promised to lead the fight against insurgency from the fronts, has receded to the comfort of the Presidential villa, from where he is leading from the rear and blaming his service chiefs?

“If President Buhari does not see that it is time for him to let go and allow more competent hands to take charge of the security of our nation, the least expected of the APC is for it to appeal to Buhari to heed the calls of patriotic Nigerians,”
PDP said.

The party also reiterated that the APC could not exonerate itself from this badge of shame and infamy by attempting to single out President Buhari for blame for their collective failures.

It said the APC was responsible for the importation of bandits as their political mercenaries in 2019.

“To worsen the situation, APC leaders, in their greed, corruption, nepotism and acute partisanship have continued to ravage our nation while failing to produce any governance strategy for the Buhari administration apart from reneging on all its promises to Nigerians.

“Nevertheless, Nigerians are already aware that the APC and its leaders have nothing good to offer our nation but only want to keep beguiling the people and use their merchants of violence, which they have been protecting, to attempt to perpetuate themselves in power come 2023; a scheme that has already failed,” PDP said.

Why I did not sign Simi, Falz, Teni to Mavin Records...

Nigerian youths have been badly bruised; we need their forgiveness –...