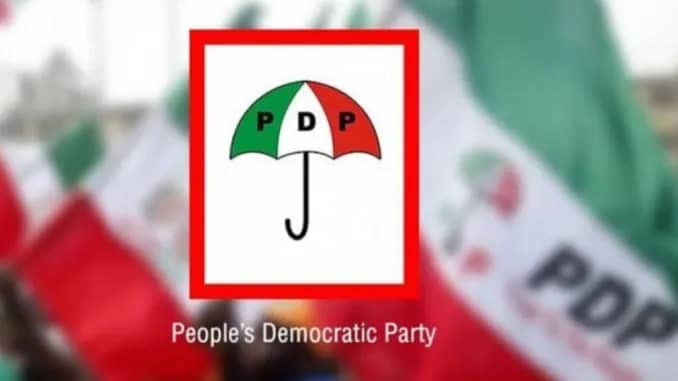 Some members of the Peoples Democratic Party (PDP) in Ekiti State have described the last Saturday’s congress in the state to elect three ad-hoc ward delegates as charade.

They alleged that the entire exercise was cooked up to foist an aspirant on the party in the state. They therefore rejected the exercise in its entirety.

According to them, there was no ad-hoc election known to law and common sense that took place on Saturday, January 15, 2022, in Ekiti State. “What the people saw were a travesty, a fiasco and a shame”, they claimed.

“These names were announced 12 hours before the Election Day exercise, which was scheduled for Saturday, January 15, 2022, in all the 177 Wards of Ekiti State, leaving a difficult space for objection.

“The Chairman of the committee, H.E. Chief Udom Emmanuel, did not come to Ekiti State, and there was no communication from the NWC announcing a replacement. However, a different person, the immediate past National Legal Adviser of the PDP, Emmanuel Enoidem, who is not recognised by the NWC to be the Chairman of the Ekiti Ad-hoc delegates exercise, based on its official announcement, surfaced to conduct the exercise in the state.

“The immediate objection by agents of some aspirants to the person acting as the Chairman was rebuffed by the committee, and there was no letter or communication from the NWC announcing a replacement. While this had heightened tension in the party, aspirants, agents and members elected to maintain their peace, believing there is an appropriate channel of communicating this abnormal development to the party.

“There was poor communication from the NWC and the five-man committee to the aspirants. There was no document containing the guidelines (on the party’s register and membership cards to be used) made public and available ahead of the conduct of the entire exercise. However, it was not hidden to the NWC that one man had cornered the State Working Committee of the party, and they are answerable to him. The committee could not have used this already compromised structure to reach the other aspirants.

“True to the concern of the aspirants, agents and party members, the entire exercise was mishandled from the beginning to the end. Unfortunately, the access given to one aspirant led to the hijack of the materials meant for the conduct of the ad-hoc elections in the 177 wards.

“The materials for the three-man ad-hoc exercise were smuggled through some faceless individuals from a compromised list of returning officers for the Local Government, while others were collected through the back door. They were all taken to the NTS event centre owned by former Gov Ayo Fayose, which was under heavy security presence.

“The following aspirants: Chief Segun Oni, Senator Biodun Olujimi, Pro. Kolawole Eleka, Hon Femi Aribisal and Lateef Ajijola had addressed party members in the morning calling for a credible process, and later met with the five-man committee to express their misgivings after the fiasco that took place was beginning to be noticed.

“Party members across the 177 wards came out in good numbers to exercise their internal franchise. They were orderly and had queued up in some places waiting for the arrival of the electoral officers. Sadly, they were denied the opportunity to participate in the ad-hoc election following the diversion of the materials meant for the exercise.

“There was hardly any ward in the entire 177 in Ekiti State where the ad-hoc election was conducted, except for an afterthought kangaroo arrangement in a few locations where some persons were told to start jubilating on camera to justify the electoral robbery,” they said.

They wondered why the first major assignment by the Iyorchia Ayu led NWC cannot be carried out “without the immediate past Uche Secondus’s NWC hand in it?

APC Chairmanship: Buhari yet to adopt any candidate –Presidency