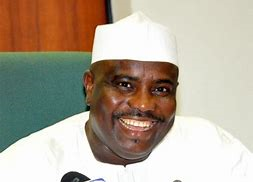 The national leadership of the Peoples Democratic Party (PDP) has condoled with the Chairman of PDP Governors’ Forum and Sokoto State Governor, Aminu Waziri Tambuwal over the death of the patriarch of the Tambuwal family, Sheikh Haruna Waziri Usman.

The party in a statement by the National Publicity Secretary, Kola Ologbondiyan, lamented the death of the highly revered and distinguished scholar as a huge and irreplaceable loss, not only to the Tambuwal family but also to the people of Sokoto state, Nigeria and humanity in general.

The PDP extolled the late Sheikh as a highly devout Muslim, a beacon of light, whose life and teachings served as a great source of inspiration and direction to many, especially the younger generation of leaders in all spheres of life.

“Our party is pained that our nation has lost one of her rarest gems, who left the stage at the time his prayers, wise teachings and guidance are needed the most,” PDP said.

The party commiserated with Governor Tambuwal, the entire Tambuwal family as well as the people and government of Sokoto state and prayed God to grant them the fortitude to bear this great loss.

Reasons Coronavirus crossed over with us into 2021 and the looming...