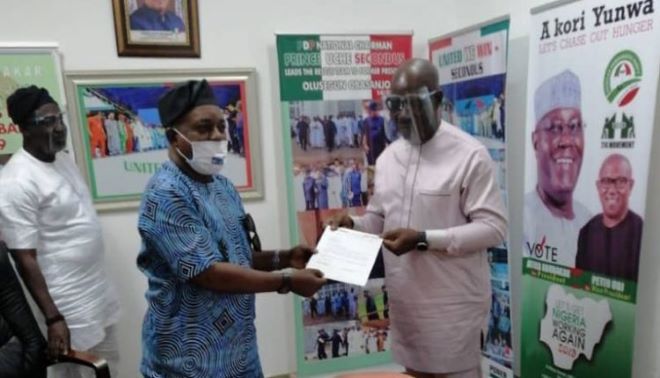 The Peoples Democratic Party (PDP) is having a tough time, trying to get Edo State Governor, Mr Godwin Obaseki, to emerge unopposed during its primary slated for Thursday, June 25.

Other aspirants vying for the ticket of the party have refused to back down on their aspirations, despite intense pressure on them..

The three governorship aspirants insisting on exercising their right of participation in the primary election are Gideon Ikhine, Ogbeide-Ihama and Mr Kenneth Imansuagbon.

The leadership of the party had asked them to step down for Governor Obaseki who formally joined the party last Friday along with his deputy, Hon. Philip Shuaibu.

Before Obaseki’s movement, the PDP had screened and cleared the three aspirants for the primary election.

Obaseki’s defection had, after a series of negotiations with the party leadership, lrd to the postponement of the primary election to Thursday, June 25.

Ahead of the primary, Obaseki reportedly met with Delta State Governor, Dr. Ifeanyi Okowa; Chairman of the PDP Governors Forum, Hon. Aminu Tambawul and the Rivers State Governor, Mr. Nyesom Wike, in Port Harcourt on Sunday to strategise on how to get him the ticket.

It was gathered that a meeting held Saturday night among key leaders of the PDP and the three governorship aspirants ended in a deadlock.

This followed the refusal of Imansuagbon, Ikhine and Ogbeide-Ihama to yield to pressure to step down for Obaseki.

In furtherance of the bid to persuade the trio to step them for Obaseki, some governors of PDP-controlled states, led by Okowa, and the party’s National Assembly lawmakers arrived in Benin City on Sunday.

Their mission was to join forces with the state chapter of the party to persuade the three governorship aspirants to step down in the interest of the party.

Imansuagbon vowed not to step down for Obaseki or anybody, stressing that doing so would jeopardise his 16 years’ dream and financial commitment to the governorship project.

He said he expected Obaseki to step down for him considering his years of aspiration, funds and psychological implications such exercise would have caused him.

“Action by those calling for a stepdown must be condemned by all; it is wicked and undemocratic. The military can’t do this; we don’t have democracy in Nigeria, what we have is autocracy.

“There is no morality in all this. He (Obaseki) can’t push my dream of 16 years away. Thank God for the position of Benin monarch, Oba Ewuare 11 who said he needs peace to prevail and that there should be no godfatherism,” he said.

On whether there is pressure coming from personalities, key leaders and elders of the PDP, Imansuagbon said: “Yes, there is pressure from them. But it is not about pressure, but about doing the right thing in line with the constitution of the Federal Republic of Nigeria, due process and the Electoral Act.

“It is disappointing and a big shame in Edo State and the entire nation and it portends danger for the country and the party. Nigerians should rise up against what is happening. We are not in the jungle; it is not a do-or-die affair, but about the process. It is totally unacceptable.”

However, when contacted, Ogbeide-Ihama said he was in a meeting and not disposed to making any comment.

Ikhine said he had resolved to make his position on the issue known on Monday.

However, Obaseki met with Okowa, Tambawul and Wike in Port Harcourt on Sunday to strategise for the party’s primary election.

The main purpose of the meeting was for Wike to prevail on the immediate past Chairman of the PDP in Edo State, Chief Dan Orbih, to prevail on his associates in the governorship race to step down for Obaseki.

Ths belief is that any pressure from Orbih would help soften the grounds for Obaseki to emerge as the consensus gubernatorial candidate of the PDP in Edo State.

CBN moves to ensure prudent use of foreign exchange