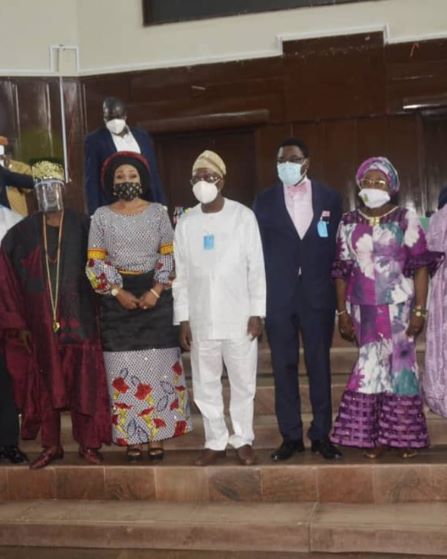 As part of efforts aimed at reducing human trafficking in the state, the Oyo State Government and the National Agency for Prohibition of Trafficking in Persons (NAPTIP), on Thursday, inaugurated the State Task Force on Human Trafficking at the State Assembly Complex.
The state governor, Seyi Makinde, who was represented by the Deputy Governor, Engr. Rauf Olaniyan, said human trafficking posed a great distress on the society.
He charged the Task Force to work assiduously to combat human trafficking by adopting effective measures that could prevent the menace within the state, while assuring them of the support of government in the course of the assignment.
The Deputy Governor thanked the DG for showing so much zeal in ensuring that Human Trafficking was stamped out of the State and Nigeria as a whole.
He promised the full support of the Oyo State Government in the fight and assured the DG that NAPTIP would get every necessary support in ensuring “the Task Force thrives in its mandate.”
Speaking during the inauguration, the Director-General of National Agency for the Prohibition of Trafficking in Persons (NAPTIP), Dame Julie Okah-Donli, thanked the Oyo State Government for the efforts aimed at tackling the twin evils of Human trafficking and irregular migration in Oyo State.
she gave an overview of NAPTIP as the Federal Government’s response to the fight against this deadly menace.
The Director General also spoke on the Agency’s mode of operation as regards Human Trafficking, Sexual and Gender Based Violence.
She further explained how the Agency had been working assiduously to ensure that “Oyo State and Nigeria become free of these deadly menaces.”
The Director General said she reposed confidence in the ability of members of the task force to fulfil their mandates.
She thanked the Olubadan of Ibadan Land for his support towards the goal of having a Task Force in the state.
Please follow and like us:

Buhari has approved funds for beneficiaries of 774,000 jobs programme, says...