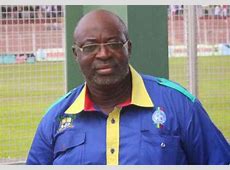 Ahead of the FIFA U17 World Cup taking place in Brazil 26th October – 17th November, Acting President of the Nigeria Football Federation, Barrister Seyi Akinwunmi has charged the Manu Garba-led technical crew of the Golden Eaglets to focus on the youth development policy and programme of the Federation.

Akinwunmi, who is also the Chairman of the NFF Football Committee disclosed this on Monday when he visited the training camp of the Eaglets at the FIFA Goal Project, MKO Stadium, Abuja.

According to him, the FIFA U17 World Cup tournament should not been seen as a platform to win at all cost, but an avenue to ensure that Nigeria, being a hub of football talents in Africa, continue to discover and nurture raw football talents that abound in the country through the developmental policy of the NFF.

“The technical crew has nothing to prove to anybody. FIFA U17 World Cup is a developmental programme and Nigeria has shown that she has the ability to win the tournament at the world stage. We have won it five times previously. But what we want is a little extra and probably even more important is the development of the players,” Akinwunmi said.

He continued: “It is to build a system whereby, getting into the national U17 team, you have to go through a pathway, you don’t go through a short cut. There are so many players in the country that don’t have the means to be in Abuja, yet they are very good, but they can play in their States and in their zones and if they are discovered to be very good, then they can come to Abuja. The fact that some players have the means to enter a bus or plane to come to Abuja and do screening should not give them advantage.

“I’ve explained this position to the technical crew and we are aligned because it is a policy of the board, that is the way we want to go as a Federation. I’m very happy and I can see the future Super Eagles, the U13s and the U15s that have improved in their game and grown in their ability to interact socially and these are the things we want.

“Not all of them who are of age will get into the team because we have some players that featured in Tanzania, but we are glad that there are some that are already competing for shirts and this is what we want. We want the system of youth development to grow. We don’t want people to be sending players to the national team from all nooks and crannies. We want a system where the best will emerge at the top,” he said