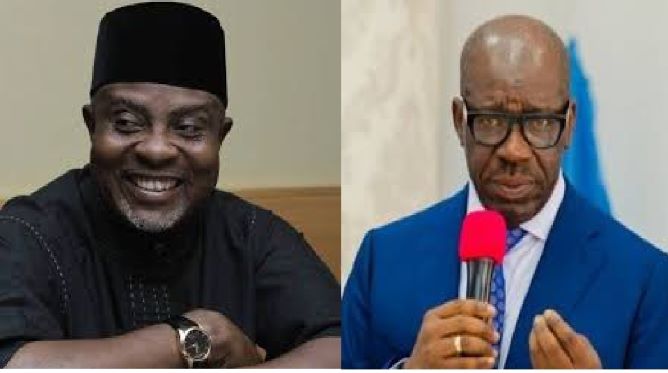 It is sad, sickening and unfortunate that Obaseki and his minions, like Osaro Onaiwu, have determined to turn Edo State into a theater of war over mere elections. Let them be reminded that elections come and elections go but our State and the people remain. All actors in this election must do their utmost to curtail verbal hostility which inevitably leads to physical hostility.
Be it known that Comrade Adams Oshiomhole is a citizen of the Federal Republic of Nigeria, a former Governor of Edo State and a former National Chairman of the APC. If he therefore wishes to visit President Buhari at Aso Rock, that ordinarily should not be news. However, in this season of elections, it is easy to see how mischief makers would want to seize every opportunity to make a mountain out of a mole hill. Captain Hosa Okunbo is not a candidate for elections. Let no one be in any doubt however, that he is a stakeholder who is free to exercise the right of free speech and association just like 4.2 million other citizens of Edo State. As a businessman with investments and properties in Edo State; as a mentor to many young people; as a recognized son of the palace, having been declared thus by our Royal Majesty, Oba Ewuare 11, it does not make any sense for him to be associated with violence in any way, shape or form as it does not serve his interest. No one makes violence in his own place of abode.
The governor as Chief Security Officer of Edo State must take full responsibility for the peace and security of Edo State and strive to create an atmosphere for every citizen of Edo State to express themselves freely as equal stakeholders. He should therefore advise Mr. Osaro Onaiwu to stop manufacturing half truths, innuendos and outright lies in their quest to heat up the polity and accuse people of crimes in order to create justification for arrests and the unleashing of State violence on hapless citizens.
Obaseki has had four years to lead the people of Edo State. He started well and Captain Hosa made his personal resources and extensive network available to him and his delegation on their initial visit to China to seek for investors to come to our sleepy State only known as a place for civil servants. We were all hopeful that he would bring his much touted experience in the private sector to bear on governance and help change the narrative. Instead, against all advice from well meaning people in Edo State and Nigeria in general, he declared an unprovoked war on APC Party members and the Chairman of the Party, Comrade Adams Oshiomhole.
Precious time that should have been dedicated to building Edo State has been employed in tearing down existing structures through violence and threats of violence and actual infliction of violence, by pulling down physical structures after illegally revoking the C of O of properties legally acquired by law abiding citizens of Edo State. Obaseki by now should have developed a robust record of achievements upon which his bid for re-election should be firing. In the absence of any such accomplishments, he has resorted to propaganda which can only go so far.
The people of Edo State have eyes and they can see. The people of Edo State are brilliant and they can think for themselves. The people of Edo State are independent-minded  and so, they can make their own decisions.
We ask that the governor should campaign on his record and allow the people to express themselves on September 19th. Let him be advised to sheathe his sword and hit the road to appeal to the people and tell them how their lives will be better in the next four years under his new policies which he was unable to lay out to the peace loving people of Edo State because he was busy fighting instead of building.
Pastor Ize-Iyamu has been busy traversing the length and breadth of Edo State, showcasing the SIMPLE agenda and explaining to the people why they should vote for him. The people yet await Obaseki’s program as he has been advised to stop mimicking a Trump mantra, Make Edo Great Again. At this point, we may need to ask him what he has been doing for the last 12 years, 8 of which he spent as economic Czar to Governor Adams Oshiomhole and the last 4 years as de facto captain of the Ship of Edo State. God bless the people of Edo State and may God bless the Federal Republic of Nigeria.
I write because I am involved.
▪︎Michael Ovienmhada, Author, Poet, Playwright and Public Affairs Commentator can be reached via omeekey@hotmail.com.
Please follow and like us:

The North and Its Failed Political Industry, By Dan Agbese