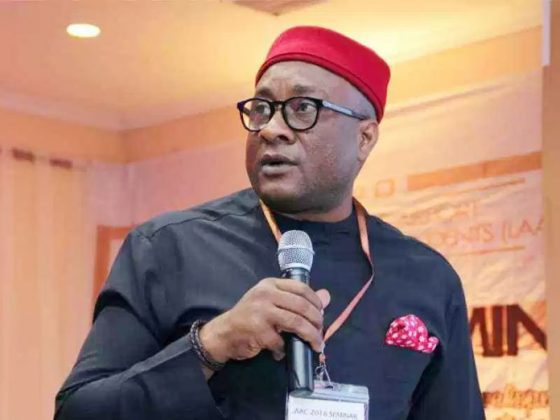 Chairman/CEO of Nigeria’s largest and fastest growing airline, Air Peace, Allen Onyema has denied charges of fraud and money laundering leveled against him by the United State Justice Department.

The US Attorney’s Office in the Northern District of Georgia had in a charge accused Onyema of money laundering “for moving more than $20 million from Nigeria through United States bank accounts in a scheme involving false documents based on the purchase of airplanes.”

In a swift response, however, Onyema said on Saturday that all the allegations “are false and are in no way in line with my character as a person and as a business man.”

He said in a short statement that all the money transfers for the purchase of aircraft passed through the Central Bank of Nigeria (CBN) and hinted that lawyers were working on the allegations which would be refuted.

The US Department of Justice had announced on Friday that Onyema had been charged with bank fraud and money laundering for moving more than $20 million from Nigeria through United States bank accounts in a scheme involving false documents based on the purchase of airplanes.

The statement by the Northern District of Georgia DOJ said Air Peace’s Chief of Administration and Finance, Ejiroghene Eghagha, has also been charged with bank fraud and committing aggravated identity theft in connection with the scheme.

The statement further said: “Onyema allegedly leveraged his status as a prominent business leader and airline executive while using falsified documents to commit fraud,” said U.S. Attorney Byung J. “BJay” Pak.  “We will diligently protect the integrity our banking system from being corrupted by criminals, even when they disguise themselves in a cloak of international business.”

Robert J. Murphy, the Special Agent in Charge of the DEA Atlanta Field Division commented on the indictment, “Allen Onyema’s status as a wealthy businessman turned out to be a fraud. He corrupted the U.S. banking system, but his trail of deceit and trickery came to a skidding halt. DEA would like to thank the many law enforcement partners and the subsequent prosecution by the U.S. Attorney’s Office who aided in making this investigation a success.”

“This case is a prime example of why IRS-CI seeks to partner and leverage its expertise in an effort to thwart those seeking to exploit our nation’s financial system,” said Thomas J. Holloman, IRS-Criminal Investigation Special Agent in Charge of the Atlanta Field Office. “With the importance of our banking system to the movement of money around the world, those attempting to use intricate schemes to commit bank fraud through the use of falsified documents and other means should know that the odds are now heavily stacked against them as law enforcement is combining its talents to protect the sanctity and integrity of the nation’s financial system.”

“Onyema set up various innocent sounding multi-million-dollar asset purchases which were nothing more than alleged fronts for his scam,” said acting Special Agent in Charge Robert Hammer, who oversees HSI operations in Georgia and Alabama. “I’m proud to be part of a team of law enforcement agencies that come together to identify and attack criminals that attempt to profit from the exploitation of our nation’s financial systems.”

According to U.S. Attorney Pak, the indictment, and other information presented in court: Onyema, a Nigerian citizen and businessman, is the founder and Chairman of several organizations that purport to promote peace across Nigeria, including the Foundation for Ethnic Harmony, International Center for Non-Violence and Peace Development, and All-Time Peace Media Communications Limited.

Beginning in 2010, Onyema began travelling frequently to Atlanta, where he opened several personal and business bank accounts.  Between 2010 and 2018, over $44.9 million was allegedly transferred into his Atlanta-based accounts from foreign sources.

Onyema is also the CEO and Chairman of Nigerian Airline, Air Peace, which he founded in 2013. In years following the founding of Air Peace, he traveled to the United States and purchased multiple airplanes for the airline. However, over $3 million of the funds used to purchase the aircraft allegedly came from bank accounts for Foundation for Ethnic Harmony, International Center for Non-Violence and Peace Development, All-Time Peace Media Communications Limited, and Every Child Limited.

Beginning in approximately May 2016, Onyema, together with Eghagha, allegedly used a series of export letters of credit to cause banks to transfer more than $20 million into Atlanta-based bank accounts controlled by Onyema.  The letters of credit were purportedly to fund the purchase of five separate Boeing 737 passenger planes by Air Peace.  The letters were supported by documents such as purchase agreements, bills of sale, and appraisals proving that Air Peace was purchasing the aircraft from Springfield Aviation Company LLC, a business registered in Georgia.

However, the supporting documents were fake — Springfield Aviation Company LLC, which is owned by Onyema and managed by a person with no connection to the aviation business, never owned the aircraft, and the company that allegedly drafted the appraisals did not exist.  Eghagha allegedly participated in this scheme as well, directing the Springfield Aviation manager to sign and send false documents to banks and even using the manager’s identity to further the fraud.  After Onyema received the money in the United States, he allegedly laundered over $16 million of the proceeds of the fraud by transferring it to other accounts.

Members of the public are reminded that the indictment only contains charges.  The defendants are presumed innocent of the charges and it will be the government’s burden to prove the defendant’s guilt beyond a reasonable doubt at trial.

This prosecution was brought as a part of the Department of Justice’s Organized Crime Drug Enforcement Task Forces (OCDETF) Co-located Strike Forces Initiative, which enables agents from different agencies to collaborate on intelligence-driven, multi-jurisdictional operations against a continuum of priority targets and their affiliate illicit financial networks.  These prosecutor-led co-located Strike Forces capitalize on the synergy created through the long-term relationships that can be forged by agents, analysts, and prosecutors who remain together over time, and they epitomize the model that has proven most effective in combating organized crime.  The specific mission of the Atlanta Strike Force is to disrupt and dismantle the most significant drug trafficking and money laundering organizations designated as Consolidated Priority Organization Targets or Regional Priority Organization Targets and their affiliates impacting the Atlanta metropolitan area and the Northern District of Georgia.

Onyema’s statement read: “Thank you for reaching out to me. I can confirm to you that all allegations are false and are in no way in line with my character as a person and as a business man whose only aim has been to build Nigeria and improve well-being.

“As the press statement clearly stated, these are indictments that only contain charges. I am innocent of all charges and the US government will find NO dirt on me because I have never conducted business with any illegalities.

“Be rest assured that I also have my lawyers on this and these mere allegations will be refuted.

“I never laundered money in my life, neither have I committed bank fraud anywhere in the world. Every Kobo I transferred to the US for aircraft purchase went through the Central Bank of Nigeria LC regime and all were used for the same purpose. The American companies that received the funds are still in business. I never took a penny from any US bank or Nigerian bank. I am willing to defend my innocence in the US courts.”

(With additional report from Daily Trust)

Kalu debunks reports, says “I neither visited nor discussed IPOB with...

Ajoke Muhammed: A Consequential Matriarch at 80, By Aisha Muhammed-Oyebode