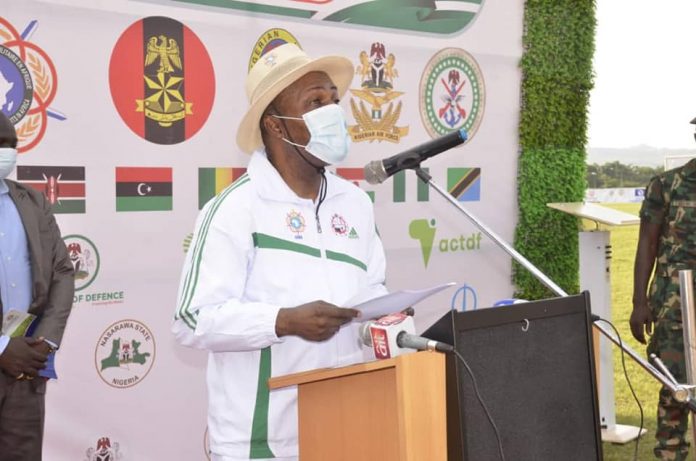 The Minister of Science Technology and Innovation, Dr Ogbonnaya Onu, has called on African countries to work together in securing the continent which is bedeviled by myriad of security challenges.

According to Deputy Director Defence Information, Air Commodore Wap Maigida, the Minister gave the charge on Monday while declaring open the first edition of the Chief of Defence Staff Organization of Military Sports in Africa (OSMA) Sahel Countries Military Games in Abuja.

Dr Onu, who was the Guest of Honour, said Africans should work together to secure lasting peace as well as safety of lives and property in the Continent.

He commended the OSMA leadership for organising the sporting events, noting that the assembling of soldiers from different parts of the continent would awaken the spirit of comradeship and friendship in the Sahel region in particular and Africa in general.

According to him, the games will also inculcate core values of integrity, excellence, and service delivery among the participating militaries.

He commended the leadership of the armed forces for demonstrating what he described as the resolve to ensure that professionalism, discipline, loyalty and dedication in the performance of their duties, while saluting the gallantry and bravery of officers and men in surmounting the security challenges.

He maintained that the present administration in Nigeria was working very hard to secure the nation, as it is determined to ensure that all Nigerians are safe, secure and live in peace.

The Chief of Defence (CDS), Gen Lucky Irabor, in his remarks, said the Sahel military games for peace and solidarity tagged Abuja 2021 was in line with his yearning and aspiration to foster a professional Armed Forces of Nigeria capable of effectively meeting constitutional imperatives.

The CDS charged members of the armed forces in the Sahel region to continue to maintain high level of mental alertness and physical fitness which, he said, was a cornerstone of ensuring combat readiness for a successful mission.

Gen Irabor disclosed that this edition of the military games themed” Sporting for Peace” heralded the aspiration of the non-kinetic aspect of military operations to mitigate the war against insurgency and banditry which are prevalent within the sahel countries. He maintained that personnel of the affected countries made sacrifices daily towards tackling these security challenges.

The Defence Chief urged the participating athletes to imbibe the spirit of sportsmanship while displaying optimal performance towards winning laurels.

According to him, the week-long championship is intended to also promote synergy and cement African brotherhood among the participating militaries.

The OSMA President further explained that the next edition which will be hosted by the Republic of Chad shall feature additional games, including combat sports, marathon race, shooting, boxing and basketball.

Brig Gen Maikano thanked the CDS, Service Chiefs and other co-sponsors as well as partners for their support for the games, which he revealed was in realisation of one of his campaign promises

Okotie: A troubadour and myrmidon of Christ @ 62, by Ladi...

Migrating all-through; East or West, home is the best, By Prof....

Pomp as Araraume chairs board of new NNPC, By Sufuyan Ojeifo

NDDC: Intrigues as Acting MD takes over from Acting MD on...

Let us develop our youths, Ooni counsels, as Emir of Kano...