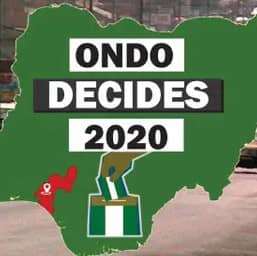 A Civil Society Organisation, Yiaga Africa, has called on the candidates of the Peoples Democratic Party (PDP) and the Zenith Labour Party (ZLP), to accept the outcome of the Oct. 10 gubernatorial election in Ondo State.

Mr Eyitayo Jegede contested under the umbrella of the PDP, while Agboola Ajayi contested on the platform of the ZLP.

Addressing a post-election press conference on Sunday in Akure, Mr Ezenwa  Nwagwu, the Co-Chair of Yiaga Africa, also urged Gov. Akeredolu to be magnanimous in victory.

Nwagwu said, given the significant rate of procedural infractions around counting of “spoilt and counterfeit” ballot papers, the body would recommend better training for election-day INEC ad-hoc officials.

He, however, said the infractions never undermined the integrity of the process, but were signs that election-day officials deserve more training to improve their performance.

“Yiaga Africa commends INEC for its efforts to improve on the electoral process and efforts to comply with the COVID-19 protocol with respect to providing disinfectant/hand sanitizers in all polling units.

Yiaga Africa, however, believes that there are opportunities for improvement in elections and called on INEC to conduct a post-election audit on both the Edo and Ondo governorship elections.

“This is important in order to enable the Commission to assess its performance, identify faulty operational areas for improvement and drive policy reforms to effectively plan for future elections.

“Additionally, the National Assembly should accelerate reforms to the Electoral Act to legalize the effective deployment of technological tools to promote citizen’s participation and enhance transparency in the electoral process.

“The INEC Result Viewing portal deployed for the election has demonstrated how citizens’ access to polling unit results increases the integrity of the electoral process and encourages acceptability of electoral outcomes.

“Yiaga Africa commends the National Peace Committee (NPC) for responding to the call by stakeholders on the threat of violence as indicated in Yiaga Africa’s Pre-election observation report.”

He said “The interventions contributed in no small measure to the peaceful conduct of the election.

“Yiaga Africa would like to thank many Nigerians across the state who volunteered to serve as non-partisan Watching The Vote (WTV) citizen observers on behalf of all the people of Ondo,” he said. (NAN)

Immigration deprives #EndSARS promoter from travelling out of Nigeria